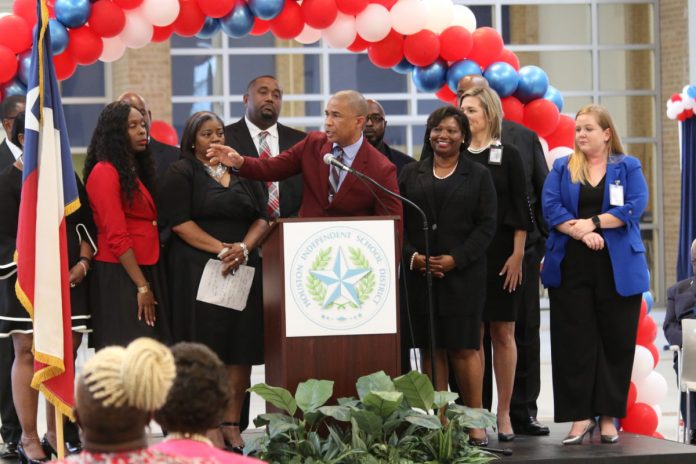 The Houston Independent School District saw some improvement at four long-struggling schools — but not enough to ease the threat of a state takeover, and likely increasing the odds that the state’s Education Commissioner will replace the entire elected school board.

A state law known as House Bill 1842 triggers a state takeover or school closures if a campus fails state standards for five years or more. The threat has loomed over Houston, the state’s largest school district, for two years. This past school year, HISD had four schools on the must-improve list: Highland Heights Elementary, Henry Middle School and Kashmere and Wheatley high schools.

One of them, Kashmere High, earned a C on the school ratings released Thursday. It marks the first passing grade for the historically black school in a decade and breaks its record as the longest-running school on the state’s failing list.

The three other long-struggling schools in Houston fared worse: Highland Heights Elementary earned a D, Henry Middle a D, and Wheatley High made an F for the 2018-19 school year. A D grade still puts a school at risk of sanctions if it doesn’t continue to improve.

Overall, Houston ISD earned a B grade for its 280 schools.

“I think we should be celebrating because three of the four schools met the state accountability standards. Kashmere for the first time in 10 years,” said Ruth Kravetz with the advocacy group Community Voices for Public Education.

Grenita Lathan, HISD’s Interim Superintendent, echoed his sentiment, saying “it is not how you start the race it’s how you finish the race.”

Lathan blamed Wheatley’s failing score on a technicality, but she told reporters that she doesn’t plan to appeal the rating, saying they stand by the school and pledging to pass next year.

The likelihood of a state takeover

The new grades give Texas Education Commissioner Mike Morath another factor to consider as he weighs the possibility of removing the HISD nine-member board of trustees and installing an outside board of managers instead.

“I said in October 2018 that I thought a board of governors was inevitable due to what I was seeing with the behavior of the board. And unfortunately that has just continued to stay bad to worse,” he said. “The fact that now that there is a another Improvement Required School that has failed tells me this is the time; I believe it’s going to happen in the fall.”

Kravetz, meanwhile,  said she doesn’t think a takeover is a sure thing.

“I do not believe it’s a foregone conclusion and I would quote [Texas Education Agency’s Deputy Commissioner for Governance] A.J. Crabill in his public meetings and private comments: an appointed board while possible is not inevitable. And there is a lot of due process left to go through,” she said. “People said it was inevitable last year. And yet here we are in this.”

Already, state investigators have recommended the Commissioner take over the district after they finished their preliminary special investigation into multiple allegations against the Houston board. Investigators found that board members allegedly met privately and broke the Texas Open Meetings Act; exceeded their governance authority; and violated rules on vendor contracts. They recommended installing outside managers, appointing a conservator and downgrading Houston’s accreditation.

Earlier on Thursday, Houston school leaders, together with Mayor Sylvester Turner and state Rep. Harold Dutton, D-Houston, are expected to address the district’s academic performance at a press conference at Kashmere High.

This year marks the first time the Texas Education Agency is issuing A to F letter grades to all public and charter schools. Last year, it phased in the new report cards for districts.

It’s fueled a years-long debate over the best way to grade Texas schools. Proponents of the new system say the A-F report cards give parents more information about how their children’s school or district is doing, compared to the state’s previous pass/fail system.

Critics, including many Texas school superintendents and educators, believe that the letter grade is oversimplified and shames lower-performing schools without taking into account other factors, like poverty, that can affect children’s learning.

Parents and teachers can check out their school or district’s grade at www.txschools.org.