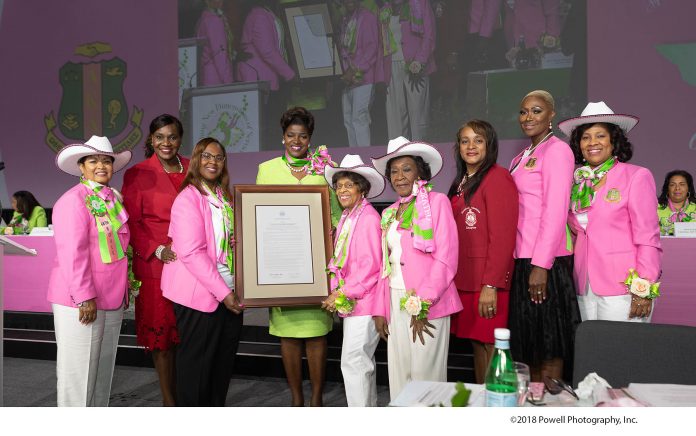 This week, HISD joined with more than 20,000 members of Alpha Kappa Alpha Sorority Incorporated to publicly thank them for donating thousands of dollars to district students and staff in the wake of Hurricane Harvey.

During Houston’s time of devastation, Alpha Kappa Alpha — one of the oldest African-American and Greek letter organizations — provided thousands of dollars in donations, as well as clothes, shoes, nonperishable food items, toiletries, and school supplies that were distributed districtwide to those impacted by the storm.

Members of local chapters also volunteered at donation sites and distribution centers across the city.

“The members of Alpha Kappa Alpha Sorority, Inc. immediately came to our aid following Hurricane Harvey,” said HISD Board of Education Trustee Wanda Adams, who served as board president during the storm. “The international president of the sorority, Dorothy Buckhanan Wilson, sent out a notice to her members asking them to direct aid and support to HISD students. The ladies answered in a big way by donating countless supplies and resources.”

Adams joined with Board of Education President Rhonda Skillern-Jones, Trustee Jolanda Jones and Interim Superintendent Dr. Grenita Lathan on Monday to present a resolution of appreciation to the organization during their 68th annual Boule. The Boule — the largest of its kind in the country — is an annual international conference that provides women with networking opportunities, leadership training, and development. It was held at the George R. Brown Convention Center.

“Without a doubt, this year was challenging as Harvey impacted so many of our staff, students, and their families even before school started,” Lathan said. “However, the tragedy also brought out the best of the Houston community. The donations and support from organizations like Alpha Kappa Alpha Sorority, Inc. helped to ensure that students were prepared for school regardless of what they had experienced.”

Lathan added: “Their helping hand allowed our students to record what could be some of the district’s greatest academic success stories.”

The presentation also was an opportunity to celebrate two former HISD administrators. Ms. Faye B. Bryant and Dr. Mattelia B. Grays. Both are former international presidents of the sorority and were key to bringing the meeting to Houston.

Alpha Kappa Alpha Sorority Incorporated was founded on the campus of Howard University in Washington, D.C. in 1908. The international organization has more than 300,000 undergraduate and alumni members in more than 1,000 chapters in more than 11 countries. Currently, there are six undergraduate chapters and 15 graduate chapters in the Houston metropolitan area. Hundreds of current and former district employees are affiliated with the organization.