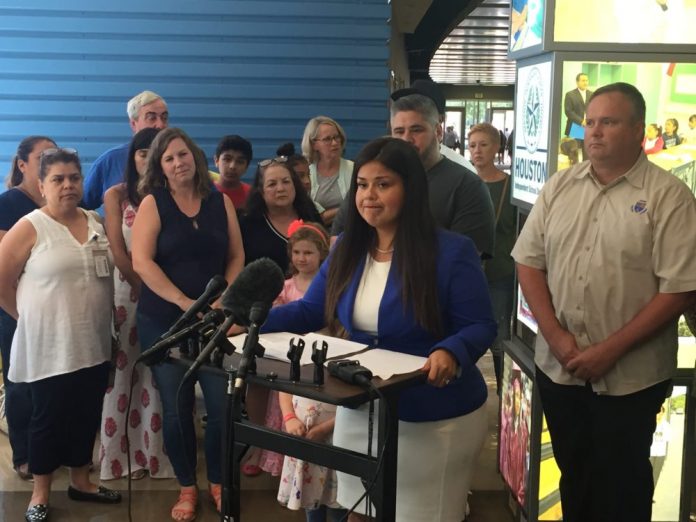 Houston ISD trustees Elizabeth Santos and Sergio Lira called Thursday for teachers to receive a modest salary increase in the upcoming school year, responding to the district administration’s proposal earlier this week to freeze educator pay amid a period of budget cuts.

The call from two HISD board members sets the stage for a closely watched school board meeting on Aug. 9, when trustees are scheduled to vote on the district’s proposal for teacher salaries in 2018-19. Santos said she has not counted whether enough trustees will support overturning the district’s proposal, but she is “confident my colleagues will value the work of teachers.”

“An extra year of experience deserves extra compensation,” said Santos, who taught at Northside High School before getting elected in December. “I’ve heard from many teachers across the district who had no idea that they would be paid less than teachers with the same experience were paid last year.”

HISD administrators on Monday announced their intention to recommend a pay freeze following a challenging budget cycle, with trustees agreeing in June to slash $84 million in spending and pull up to $17 million from a rainy-day fund in 2018-19. Teacher salaries were not publicly discussed at length during the debate over the district’s $2 billion budget, and trustees did not allocate additional funding for pay bumps.

Santos and Lira are advocating for teachers to receive “step” increases, which compensate teachers for an additional year of experience. Under the proposal, the vast majority of teachers would receive a salary bump of about $200 to $800, with a small percentage would seeing increases of $1,500 to $2,200. HISD administrators estimated it would cost $6 million to fund “step” increases.

Santos said she believes HISD already has budgeted enough money for teacher salaries to cover the “step” increases. As a result, Santos is not advocating for any additional spending cuts.

Lira said the district should be able to find $6 million, arguing the money is better spent on teachers than some unnecessary technology purchases.

The pay freeze proposal caught many teachers off-guard this week. The Houston Federation of Teachers, which represents the largest number of educators in HISD, expected teachers would receive “step” increases this year, though the union did not receive official confirmation of the district administration’s plan earlier this summer. Many teachers assumed they would get a “step” increase based on the district’s 2017-18 salary schedule for teachers, but that schedule does not apply to 2018-19.

In announcing the proposed freeze, HISD administrators noted that the district allocated an additional $10 million this year for teacher health care insurance, ensuring that premiums did not rise.

Several trustees on Monday lamented the timing of the announcement — teachers were required to sign their 2018-19 contracts by late May — and pledged to approve salary plans earlier in 2019. Trustees on Monday did not indicate they will reject the district’s proposal, though backlash to the recommended freeze could lead to opposition come Aug. 9.