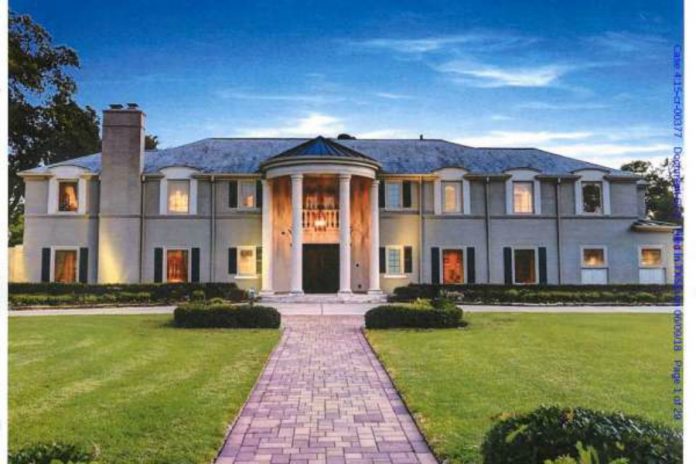 Appliances, artwork, chandeliers, furniture and televisions were all gone, either donated or sold. The recipients included charitable organizations, such as Goodwill and a Baptist church, but also the couple’s son, their real estate agent and unnamed victims of Hurricane Harvey.

The walk-through confirmed prosecutors’ suspicions that the Cluffs, who have admitted to siphoning $2.6 million their charter school and hiding the money from the Internal Revenue Service, were getting rid of their assets ahead of their sentencing scheduled for Friday. That’s when a judge is expected to deliver the couple’s restitution bill: $4.4 million.

In an emergency motion filed last week, prosecutors alleged the Cluffs violated terms of their plea agreement by disposing of their assets before sentencing without prior government approval, prompting them to seek an order barring the couple from selling any more items. U.S. District Court Judge Melinda Harmon granted the motion Tuesday, and ordered a freeze on some of the Cluffs’ assets.

The allegations mark another twist in the case of the Cluffs, who were indicted three years ago on charges that they scammed taxpayers and parents of their 1,600-student charter school, using the money to fund a lavish lifestyle. Marian Cluff pleaded guilty to mail fraud and conspiracy to commit tax evasion, agreeing to a maximum possible prison sentence of 10 years. Alsie Cluff pleaded guilty to one count of conspiracy to commit tax evasion, with a three-year maximum possible sentence.

Prosecutors are not seeking to void the plea agreement. Rather, the issue was whether the Cluffs would sell off more assets.

The Cluffs’ lawyer, Dan Cogdell, took issue with the government’s characterization of the couple’s actions, arguing they sold “no assets of significance.” Cogdell said the Cluffs had agreed to stop selling items even before Harmon granted prosecutors’ motion Tuesday.

“The Cluffs have done everything in their power to not only abide by the conditions of release but fulfill their unprecedented willingness to make complete restitution on or before sentencing,” Cogdell wrote in an email.

It is possible the Cluffs could pay full restitution in the next several weeks, even without the sold home assets. The Cluffs already have set aside $1.6 million for restitution, and they are hoping to sell their Riverside Terrace mansion soon. In court filings, Cogdell wrote the Cluffs have received one “low” offer on the property, which is listed at $2.5 million, and expect to receive other offers in the next week.

The Cluffs have other valuables. Their assets include a trust valued at about $830,000, an annuity contract account totaling about $642,000, hundreds of thousands of dollars in farm equipment, jewelry valued at $58,000, three luxury vehicles and two trucks, according to financial statements filed by the couple. The trust is the listed owner of a 73-acre ranch with a 4,628-square-foot living space, located about 100 miles northeast of Houston. Alsie, who was diagnosed with prostate cancer in April, and Marian now live on the ranch, Cogdell wrote in court records.

Susan Klein, a professor at the University of Texas at Austin School of Law, said it is “relatively rare” for prosecutors to seek to void plea agreements, particularly if any alleged violations of the deal are minimal or short-term.

“Normally, it’s the defendant who has buyer’s remorse, who says, ‘Maybe this isn’t such a good deal,’” said Klein, who said she was not familiar with details of the Cluffs’ case.

The Cluffs founded the Varnett school in 1984 as a private institution, converting it to a taxpayer-funded charter network in 1998. Marian served as the network’s board president, principal and superintendent, while Alsie worked as vice president and treasurer.

In 2013, the Texas Education Agency found the Cluffs engaged in pervasive conflicts of interest and spent extravagantly on cruises, airplane tickets and spa services. In 2015, prosecutors accused the couple of embezzling $2.6 million from the school, including $1 million from parents who provided money for field trips and fundraisers. The Cluffs admitted to the scheme and agreed to repay the $2.6 million, plus $1.8 million in unpaid taxes, penalties and interest.