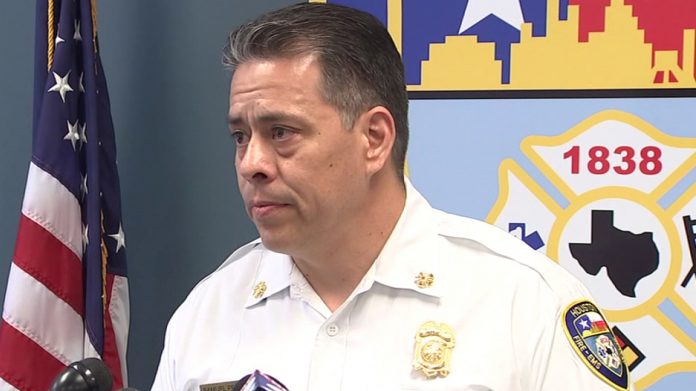 According to HPFFA, 3,018 Houston firefighters signed the resolution rejecting the leadership of Chief Peña.

“This historic vote reflects the hope of Houston firefighters that our fire department can be improved despite the loss of confidence in the fire chief. More than 3,000 firefighters made efforts to go to the Association offices to vote on this resolution. Like the 97 district chiefs that initiated this vote, they believe this vote became necessary because of failed leadership of HFD,” HPFFA President Patrick “Marty” Lancton said in a statement.

HPFFA says the 11-point no-confidence resolution addresses a wide range of issues in the fire department including underfunding and cutting of the HFD budget, a decline of the HFD fleet and facilities, increasing response times and high firefighter cancer rates.

“Chief Sam Pena is a person of integrity and a strong leader for the Houston Fire Department.

“Last month, he secured more than $3 million in grant funding to install health and safety equipment in 30 stations to protect firefighters from cancer related hazards. He also recently announced the completion of training for an 80-person Water Strike Team to focus on water-rescue missions. Since Hurricane Harvey, the Houston Fire Department has doubled its water-rescue resources. The department has purchased and received dozens of new boats and vehicles, which will save  lives and allow the department to be more effective.

“As I said last month when the Houston fire union announced its intentions to hold a vote of no confidence in Chief Pena, he is doing a great job for the Houston Fire Department and an excellent job for the City of Houston.

“What the union is doing is 100 percent political and I am certain that the public will see it for what it is.”

“I am always willing to be held accountable as long as it is fair and based on facts.  The fact is that we have accomplished more to improve conditions in just 2-1/2 years since I arrived here than had been done in the last 20 years prior to my arrival.
Firefighters, all of us, care about the same things and the facts show we have made great strides in addressing these issues with support from both Mayor Turner and City Council. The concerns raised give me a greater sense of urgency to make sure our firefighters are aware of how I am supporting the great work they are doing as evidenced by the following:

Cancer is not just a Houston problem. It is an issue fire departments are dealing with, nationwide. As a fire chief, I was shocked when I arrived in Houston to realize that our fire stations had zero basic cancer prevention equipment. I am pleased that we have been able to move aggressively in the last two years on the following cancer prevention initiatives.

My focus is now, and always has been and will be, on the safety and wellbeing of the public and our firefighters, and I remain dedicated to continue my work for the benefit of both. Ask any fire chief in any major city in the nation and you will hear that there is always more work and investment needed to keep a fire department’s fleet, technology and skills current.

I do know this: it will take all of us working together to resolve the challenges we face. We cannot afford to fight each other. We must focus on fighting fires and floods, and for the resources needed. In Houston, in the past two years, as the numbers bear out, we have been fortunate to receive increased investment for the many requests I’ve made to our city’s leadership on behalf of our department.” Sam Peña, Houston Fire Chief.