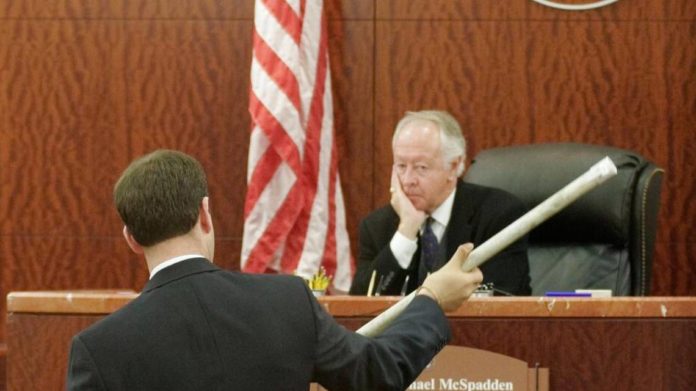 A Houston judge is in hot water after he alluded to racial bias in the criminal justice system, saying that young Black male defendants are influenced by “rag-tag organizations like Black Lives Matter.”

State Judge Michael McSpadden, who has been on the bench in Harris County since 1982, is one of more than 30 felony court judges who directed lower court judges to deny personal bonds to defendants of color for more than a decade, according to an investigation by the Houston Chronicle published last week.

“Who do they get advice from? Rag-tag organizations like Black Lives Matter, which tell you, ‘resist police,’ which is the worst thing in the world you could tell a young Black man. They teach contempt for the police; for the whole justice system,” McSpadden said.

Considering these alleged practices, McSpadden has basically shown that racial bias exists in the criminal justice system once again, the ACLU, who are calling for the judge to step down, noted. This systematic problem of bias must be called out. Though some may want to deny bias, there are many public figures who will press the issue.

Ashton Woods, an organizer of Black Lives Matter Houston, is not having what McSpadden said.

“People like him need to be voted out because he’s a representation of the old guard,” Woods said.

Claims about McSpadden point to a severely flawed system that is in need of a major overhaul. Biased judges are not a mistake that this system can afford to make to function fairly.

“There are all types down here, all races and they all made mistakes and they may continue to make mistakes. But I think it was very unfair for him to single out blacks,” Tucker Graves, president of the Harris County Criminal Lawyers Association, said.

Some of Graves’ black clients were previously treated fairly by McSpadden, but the judge’s reported comments are concerning and indicative of “a systemwide bond problem,” he said.