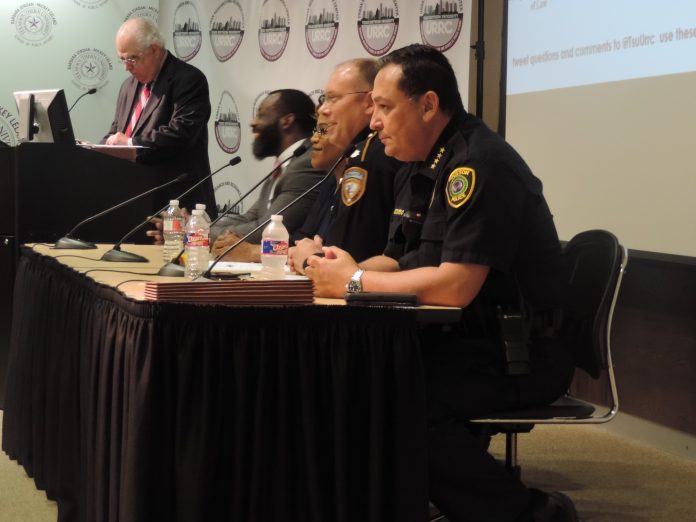 “The no-knock warrant’s going to go away, kind of like leaded gasoline in our city,” Acevedo said. He added that raids that stem from those warrants would only be used in very limited cases — and that they would not used to nab people suspected of dealing small amounts of drugs.

“You’re going to see those going away,” he said.

Acevedo announced the policy shift during a town hall meeting hosted by the Greater Houston Coalition for Justice. The event gathered criminal justice officials and politicians with local activists and members of the public — who vented their anger over the deadly raid and what they called the police’s overreliance on informants and searches rather than investigation.

The chief gave few new details about suspicions the lead officer in the raid may have lied about getting a tip about the target house from a confidential informant. Acevedo said the officer is still getting paid as the investigation proceeds, saying the arrangement is required legally but goes against his own opinion.

“I’m very confident that we’re going to have criminal charges on one or more police officers,” Acevedo said.

Dennis Tuttle, 59, and Rhogena Nicholas, 58, died in the Jan. 28 raid, which had been planned after an informant purportedly told police the couple’s house was used for heroin dealing.

No heroin was found at the residence, and Acevedo and the Houston police were forced to backtrack after initially saying the two suspects had opened fire on officers as soon as they reached the door of the house in the Pecan Park neighborhood, south of downtown Houston. The official narrative changed after it emerged that the police seemed to have opened fire first — shooting the couple’s dog.