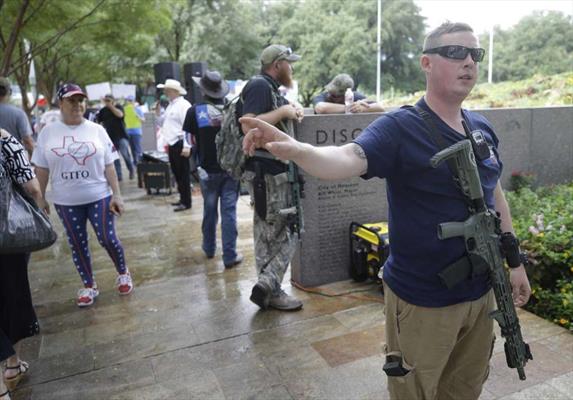 Roughly two dozen members from the Texas Patriot Network and white supremacist groups were “clearly outnumbered” when they squared off with counter-protesters outside a large Islamic convention at the George R. Brown Convention Center in Houston on Saturday afternoon.

As noted by chron.com, a Texas Patriot Network member was briefly detained after punching a counter-protester at the 55th annual Islamic Society of North America convention. Three people were handcuffed but released under the condition they leave the protests for the day, said L.J. Satterwhite, assistant chief of homeland security for the Houston Police Department.

“We want to make sure that whatever happens, it happens peacefully and no one gets harmed,” Satterwhite said. “We have been very blessed to avoid a lot of the problems that other cities have seen. We want to keep that track record going.”

“We wanted to let them know that Houston is a majority black and brown city and they are not welcome here. They are not wanted here. We will be here as long as they are here,” said Brother Maitreya, chairman of the Houston chapter of the Huey P. Newton Gun Club. “We are going to be here until we run them out of our city.”

Javier Olguin attended the counter-protest to speak out against the anti-Islamic sentiments.

“If you read the history books, you see the Jim Crow era, you see Japanese detainment camps, you see all these atrocities that happen,” he said. “A lot of people say to themselves, ‘If I were there, I would have done the right thing.’ It’s happening right now, and that’s why everybody is out here. We’re seeing the oppression of a lot of people. When people are not doing anything and they stay silent, they are complicit in that.”

Greene defended the views of the Texas Patriot Network while denouncing that the organization is racist.

“We don’t hate anybody. We want every Muslim to come to the saving knowledge of Jesus Christ,” he said. “We want every Muslim that comes to America to become an American, and we want them to understand Sharia law is a really bad idea. It hasn’t worked any place it’s been tried, and it won’t work here. We welcome anyone that comes here and wants to be an American. And today, we also want people to know we are grateful for our president, Donald Trump, for making America great again.”

The convention runs through Monday and will see thousands of Muslims descend upon downtown Dallas for talks, prayers, workshops, arts, entertainment, and festivities.