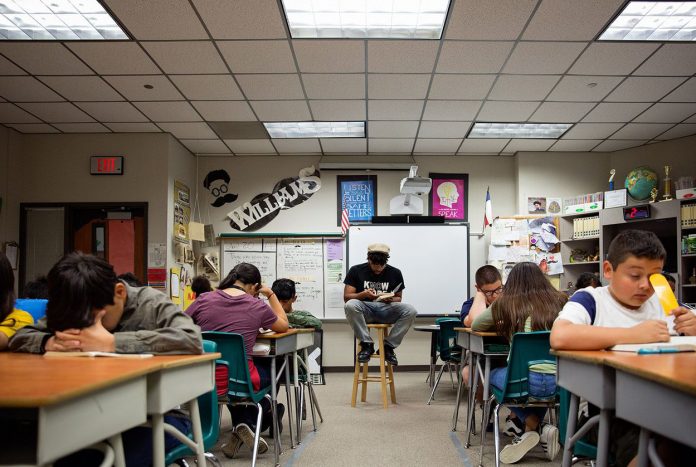 On a bright Thursday in April, in Alief Independent School District’s Mata Intermediate School, sixth-grade teacher Justin Williams walked to his classroom door from the hallway and crooked a finger, beckoning a gangly 13-year-old to come outside.

A teacher had caught Mekhi Coleman goofing around with another student, the two playfully kicking each other when they were supposed to be quietly marching to their next class.

Williams stood close to Mekhi. “Tell me what happened.”

“We were just joking around. We weren’t trying to hurt each other,” Mekhi said softly.

“How can we fix it?” Williams asked, prompting Mekhi to think of an appropriate consequence.

The 26-year-old social studies and language arts teacher was enjoying the chance to focus on his students again after months of upheaval following Hurricane Harvey. His students had become accustomed to seeing him duck into the hallway to argue loudly with federal disaster officials and car insurance agents after floodwaters swallowed most of his possessions.

She bustled down the hallway, on a mission to round up dozens of reluctant ninth-graders and convince them to give up a sunny afternoon to review basic concepts of biology in windowless classrooms. They had less than three weeks until the state-required biology exam they would have to pass to graduate, and Robinson knew her students — her “babies” — weren’t ready after losing 11 school days to Harvey’s floods.

Responsible for helping the school’s biology teachers develop and adjust their lesson plans throughout the year, Robinson had a lofty personal goal: 95 percent of her students passing the test. And she wasn’t above bribing them with snacks.

Robinson and Williams are among the many teachers across 60 Texas counties who spent this academic year struggling under pressure to keep their classrooms running after one of the worst natural disasters in Texas history.

Meanwhile, as a challenging school year comes to a close, state education officials are preparing to make momentous decisions this month about how and whether to calculate state ratings for Harvey-affected schools, including Alief ISD’s, based on this year’s test scores. Alief ISD Superintendent HD Chambers has argued that the state should waive ratings for all schools in the disaster area, but Texas Education Commissioner Mike Morath has postponed a final decision until the summer, concerned that giving schools an early exemption from ratings would cause teachers to slack off.

Chambers said his teachers continued to plan lessons while managing students’ anxiety-fueled outbursts and using vacation days to repair leaky roofs. As they awaited Morath’s final decision, they were preparing for tests that might not count.

“Is the test score what we ultimately want to measure?” Chambers said. “From my position, I’m watching kids who need these adults more than ever being helped by adults who need help more than ever, and there’s no way to quantify that.”

Williams had invited friends who lived in downtown Houston to camp out at his apartment the day Harvey hit in late August, sure they’d be fine in his second-floor unit in west Houston. But when city officials decided to release massive amounts of water from the fast-filling Addicks and Barker reservoirs north of his apartment, the water began climbing slowly up the landing until it was two stairs away from his apartment door. He tucked his pug, Sosa, under his arm and managed to find space on a boat piloted by the Cajun Navy, a grassroots group of rescuers from Louisiana.

When he got to the shelter, Williams looked around at the families who had fled and felt a pang of sympathy. “I thought, ‘These people don’t have anything, and I do,’” he said.

The next day, he got an email from his apartment complex saying that no one could return for the next month: “Everything in your house, you might need to call it a loss.”

He called Carrie Sims, a math teacher and friend, after getting rescued. “He said, ‘I want you to know where I am because I don’t have family here and I want someone to know,’” Sims recalled. “That was like a pitchfork in the heart.” At Mata, Williams was known for keeping his students’ attention, even the troublemakers, by rewarding them when they focused and demanding they take responsibility for their disruptions. He had developed the habit of talking to his students like adults after starting his career at a Louisiana school working with students who had dropped out of traditional schools — some them were as old as he was. He found that it worked with sixth-graders, too.Now, he dreaded seeing the looks of pity from teachers and students who knew he’d lost everything. “I was embarrassed to walk back in knowing I didn’t have anything and knowing that my colleagues knew,” he said.He didn’t want his students to think he was “weak.” So he told them, like adults, what they should expect.

His colleagues wanted to help without making him uncomfortable. So Sims and other teachers began buying Williams new clothes and hanging them in his classroom when he wasn’t there. Someone left a $100 bill on his desk — with no note. Sims offered to do his laundry to help him save money.

Williams was one of more than 1,400 teachers in Alief ISD — about 44 percent of the district’s teachers — who reported being homeless after the hurricane and had to stay in motels or shelters or on friends’ couches until they could find new housing or return to their homes. For a month and a half, Williams lived in a hotel, and his students whispered about seeing a burgundy sweater and pair of khaki pants over and over again.

“We were all talking and one of them was like, ‘Why is Mr. Williams wearing the same clothes every week?’” said 11-year-old Jaidyn Roby. “And I just said, ‘Remember? He got hit by Harvey.’” A fellow teacher had taken Williams to a Marshalls store and bought him the sweater and pants using her credit card points.

“They saw that outfit all the time,” Williams said. “But look, I was there.”

The students also heard Williams arguing at top volume with insurance agents in the hallway over replacing his flooded black Jeep.

“I hate that they heard that,” Williams said. “Sometimes it was like pulling teeth. Sometimes it did get really, really frustrating.”

While the other teachers surreptitiously left their gifts, some of the students decided they could help, too. Isatu Kamara, 11, decided she would help relieve the pressure on her teacher by behaving in class.

“I’m a very talkative person. So I lowered how much I talked,” she said. “I toned down a little.”

Despite the help, Williams realized he had fallen behind — school had started 11 days late, and he’d missed another week dealing with his hurricane losses — and he couldn’t cover all the reading and social studies standards the state expected him to teach that semester.

In the first nine weeks, he decided to prioritize teaching poetry in order to teach his students empathy and had them write about seeing their teachers “hurting” after Harvey.

Soon after Harvey struck, Robinson and the team of nine biology teachers returned to the Elsik Ninth Grade Center a day before their students and quickly started to plan how to make up for the lost 11 days.

They decided to focus their instruction for the year on the 16 crucial ninth-grade biology curriculum standards that Robinson calls the “sweet 16.” Those concepts, which the state requires students to know before leaving high school, were most likely to be on the May 8 state biology exam.

“Everyone hates to say that you teach to the test,” Robinson said. “To be honest, you don’t want to say it, but that’s really what we do.”

The teachers also realized they would have to dump some material and cut short the time they spent reinforcing foundational concepts their ninth-graders should have learned in middle school. “Coming back, I felt a little rushed,” said Cortnee Williams, who teaches a biology class that includes students with special needs. She noticed early in the year that her students were emotionally drained, fighting more often or not showing up for class. Academically, she said, they had a long way to go.

“Teachers are all trying to stay on pace,” Robinson said. “It’s just a high stress level. The content in the classroom is being taught at a faster pace.”

As the year progressed, the biology teachers conducted regular mini-assessments of their students. Robinson pulled struggling students from class for extra help, rounded them up for afterschool tutorials and had teachers reconfigure lessons to cover students’ knowledge gaps. She felt guilty about forcing stressed, overworked students to skip classes like gym and art, taking away their outlets to let off steam during the day. But she had little choice: “If some parents won’t let me keep them after school and all I have is the elective, I’m going to pull them from the elective.”

Growing up in Germany as the child of a military dad, Robinson remembers being told by teachers and fellow students that she was “mentally retarded” or being treated as though she couldn’t learn because she was biracial. Now, she coaches her fellow teachers on how to adjust their teaching styles for students who need extra help.

“I want to make sure I speak for those kids,” she said. “I was one of those kids.”

By April, Elsik’s biology teachers realized that their ninth-graders did not understand how to identify biological macromolecules — a concept that was almost definitely going to be on the May exam.

So Robinson created a group that included a mix of students who had failed or barely passed the mini-assessment, and a few students who were doing well, and rounded them up for weekly, 90-minute afterschool tutorials for five weeks.