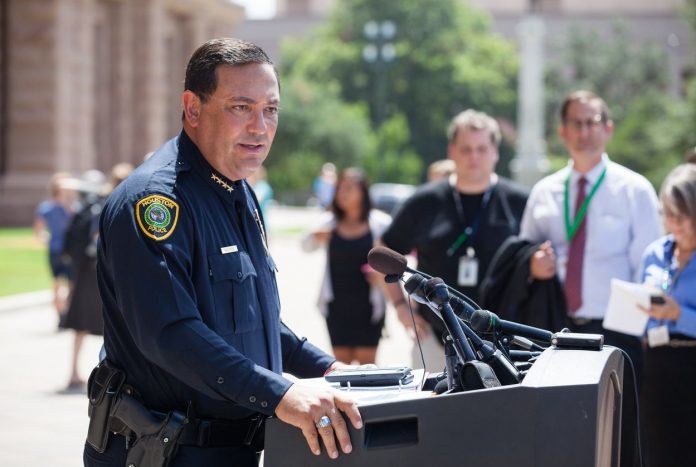 Houston Police Chief Art Acevedo called out prominent Texas Republicans on Monday for opposing gun restriction legislation to close the so-called “boyfriend loophole” after one of his officers was killed over the weekend responding to a domestic violence call.

Arturo Solis, who according to The Houston Chronicle had a previous misdemeanor domestic violence charge against a former girlfriend, should have never had access to a gun in the first place, Acevedo said in a press conference video. Sgt. Christopher Brewster was responding to the 911 call that reported Solis had assaulted his girlfriend and was armed with two guns. Solis fatally shot Brewster as soon as the officer got out of his car, authorities said.

Acevedo reproached Senate Majority Leader Mitch McConnell, R-Kentucky, and U.S. Sens. Ted Cruz and John Cornyn, both Texas Republicans, for failing to support the reauthorization of the Violence Against Women Act and not supporting a provision that would prevent dating partners convicted of domestic violence, like Solis, from owning firearms.

The police chief said the Republican elected officials were too afraid of retaliation from the National Rifle Association to support the provision.

“You’re either here for women and children … or you’re here for the NRA,” Acevedo said.

“It’s unfortunate the chief of police in Houston seems more focused on trying to advance his own political ambitions than on supporting the brave men and women of HPD,” the senator said in an email.

A spokesperson from Cornyn’s office said in an email that the boyfriend loophole provision didn’t apply to Solis’ case since there are already laws in Texas preventing people convicted of misdemeanor domestic violence from buying guns within five years after they are released from jail.

The Violence Against Women Act, first passed in 1994, provides funding for the investigation and prosecution of violent crimes against women as well as services for domestic violence and sexual assault survivors.

When the Violence Against Women Act was up for reauthorization in 2013, Cruz, Cornyn and McConnell all voted no, though it passed the Senate in a 78-22 vote.

“Unfortunately, important legislation like this has fallen casualty to impeachment mania. We will keep trying to pass a bipartisan bill but it takes two (parties) to tango,” Cornyn said in a tweet Thursday.

The Violence Against Women Act expired again in February and is now at an impasse in the Senate, which is at odds over which version of the act to pass. Although the House authorized an expanded version of the VAWA to close the boyfriend loophole, the NRA strongly opposed the House’s version, calling the provision a “poison pill” that’s “too broad and ripe for abuse” in an interview with The New York Times.

“The NRA doesn’t own me. They never have and they never will. I will sit down at the table and hash out an agreement. I will help lead it to passage, like I’ve done for Texans many times in the Texas Senate,” West said.