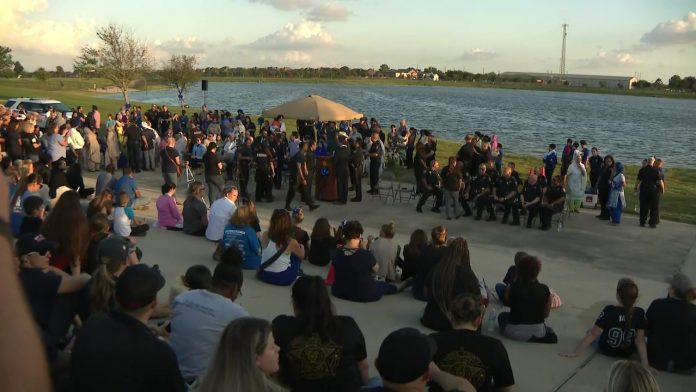 The vigil was held at Harris County Deputy Darren Goforth Park on Horsepen Creek in Cypress.

There were several tributes to Dhaliwal around the city on Monday, including a moment of silence held for him at Toyota Center before the Rockets’ preseason game.

Dhaliwal, a 10-year veteran of the Harris County Sheriff’s Office, was killed Friday when he was shot in the back of the head during a traffic stop in northwest Harris County. The deputy made history in 2015 as the first Texas law enforcement officer to be allowed to wear a dastaar, or turban, and keep a beard, among other articles of his faith, while on duty.

At the park, it was an emotional night filled with tears, laughter and, most of all, praise for Dhaliwal.

“He was an ambassador not only for Sikhism but for the Sheriff’s Office, law enforcement and everyone. He was a great deputy, and he will be missed,” Harris County Sheriff Ed Gonzalez said.

Dhaliwal’s family was also in attendance as his stories of heroism were shared.

“The first thing I want to say to his father is, ‘Thank you for raising a son with the values you have, not only the values but the courage that you gave him,'” Harris County Commissioner Adrian Garcia said.

Some who knew him and had the privilege of spending time with him say they revered Dhaliwal as a hero.

“His son, I think, is, like, 3 or 4 years old, and he would always ask his father, specifically, if he could tie a turban on him. One time we were sitting on his back porch and his son came over, asking for a turban, and Sandeep took his own turban off and tied it on his son and went and got another one. His son was just happy to look like his father,” Marcus Means said.

Others who didn’t know him said they came to the vigil with their families to pay their respects.

Deputy Jose Herrera said what happened to Dhaliwal is something he thinks about every time he puts on his uniform.

“Heartbroken, man. It’s a brother. Because I imagine myself. I put myself out on the streets and I think about my family. That could be me. He has a family, too, and he didn’t come home,” Herrera said.