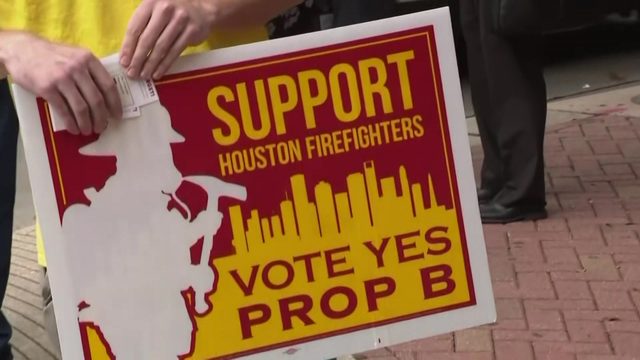 A judge has lifted a court order blocking the implementation of a new charter amendment that would give Houston’s firefighters pay parity with city police officers, but which Houston’s mayor says would cost the city up to $100 million and result in hundreds of layoffs.

“The judge has found no basis for stopping that. So now there is a valid ordinance and a valid charter amendment,” said Troy Blakeney, a legal counsel for the Houston Professional Fire Fighters Association.

The proposition was passed by voters in November.

“We now have two courts that say the constitutionality of Prop. B is no longer an issue,” Blakeney said.

The mayor and police union also contend that the measure will break the city budget, costing $98 million a year to implement and requiring layoffs of hundreds of city workers.

In Tuesday’s opinion, Wilson pointed out that voters were aware of those risks when they approved Proposition B. Wilson said that, while he’s sensitive to budget difficulties the amendment will create, “Houston voters decided they would rather have pay parity.”

“Clearly, what we said is the city has two options. Implement Prop. B or pick up the phone and call firefighters, so that we can work toward a solution that implements the will of the voters in the best possible way.”

But Mayor Sylvester Turner said nothing about negotiating in a statement issued Tuesday following the ruling.

He said the city will now begin the process of implementing Proposition B. But he added that it will trigger layoffs of some firefighters to pay the salaries of others with more seniority.

The Fire Fighters Association said its members are woefully underpaid compared with Houston police and other U.S. fire departments.

A few weeks after the election, the Houston Police Officers’ Union filed a lawsuit, claiming that the measure is unconstitutional.

A judge overseeing the case issued an injunction Nov. 30 that prevented the city from using any taxpayer money to implement the pay parity amendment. That order expired after the judge denied it.

At a hearing about the order, Houston Police Chief Art Acevedo testified that, if Proposition B goes through, he would immediately have to shut down the police academy and begin laying off officers. He said anywhere from 500 to 800 personnel would have to be let go. He said that number would depend on how much money he would have to cut from the department’s budget.

“It’s a range of anywhere from 600 positions I’d have to eliminate, which would be a combination of cadets, probationary police officers and officers of probation, all the way up to 800, so it will be pretty devastating,” Acevedo said.

Acevedo also said that cutting back on staff would severely affect response times. He said the response times to violent crimes would be reduced and that officers would be unable to respond to home burglary calls.