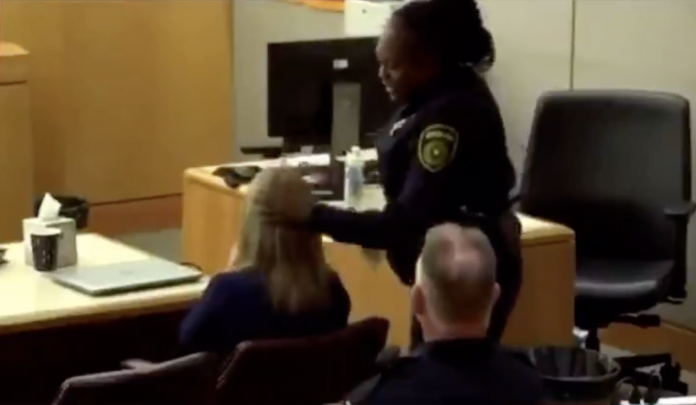 The judge who presided over Amber Guyger’s murder trial continued has been making the media rounds after she gave the convicted murderer a hug in court. Dallas District Judge Tammy Kemp appeared on “The Tamron Hall Show” Thursday morning and reportedly shed some light on another controversial moment that happened after Guyger’s guilty verdict was read in court.

Kemp spoke about the viral moment when a courtroom bailiff was caught on video appearing to stroke Guyger’s blonde locks in a moment that seemed to be in line with the outpouring of sympathy for the convicted murderer. Guyger was recently found guilty of murdering the innocent and unarmed Botham Jean in his own apartment last year. Kemp used some of her time on Tamron’s show to offer some context to the awkward moment shared between Guyger and the bailiff.

A second look at the video of the bailiff and Guyger could lend some credence to Kemp’s claim Thursday. But people still seemed to have some doubt, especially since the practice of a bailiff checking a defendant’s hair immediately after a guilty verdict was not a common sight to the untrained eye.

Kemp’s appearance on “The Tamron Hall Show” came one day after her first televised interview, during which she cried and appeared to pull the race card while explaining her decision to offer Guyger her bible as well before giving the convicted murderer a hug in court.

Kemp told CNN she thought it would be “rude” if she didn’t hug Guyger after hugging Jean’s family. She recalled that said: “‘Ms. Guyger — Mr. Jean has forgiven you. Please forgive yourself, so you can have a purposeful life.’ And she asked me, ‘Do you think my life can still have a purpose?’ And I said, ‘I know it can.’”

Kemp claimed Guyger asked, “Do you think God will forgive me?” Kemp said yes and, according to the judge, Guyger added, “Well, I don’t even have a Bible. I don’t know where to begin.”

Kemp went on to explain to CNN, “And that’s when I went to retrieve my Bible and gave it to her.” Kemp also said, “She did tell me she’d bring my Bible back in 10 years.”

Kemp also responded to the backlash by saying, “Frankly, I don’t think I would be getting this criticism if Miss Guyger were a Black woman. I hate that we limit our compassion to one race.”

According to The Washington Post, legal experts said the hug was “not only rare but inappropriate.” Kenneth Williams, a professor at the South Texas College of Law in Houston, who has 30 years in legal practice told the Post, “She has indicated an affinity or sympathy for the defendant.”

President and Director-Counsel of LDF (NAACP Legal Defense and Educational) Sherrilyn Ifill wrote on Twitter, “A judge is not a an average citizen. She is not the victim. She is not the prosecution (technically ‘the peopl’). She must, especially in a case that arouses passion and conflict like this one, stand for impartial justice. She may speak words from the bench. This is too much.”