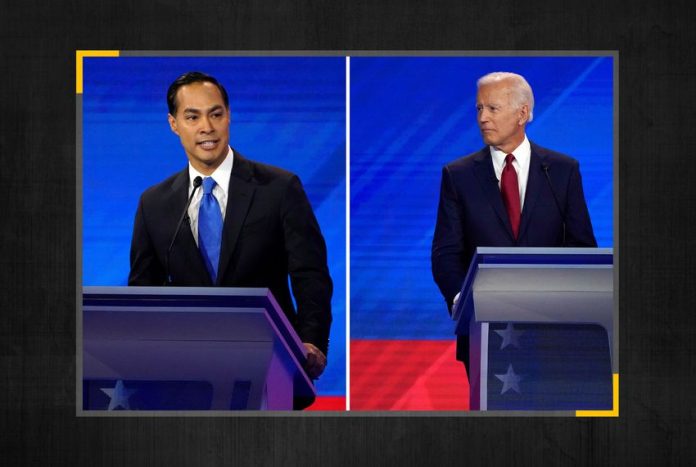 The showdown early in the debate came after Biden criticized the Medicare-for-all health care plan touted by U.S. Sens. Elizabeth Warren and Bernie Sanders, among others. Arguing that the idea would force people off their current insurance plans, Biden instead praised the Affordable Care Act approved under President Barack Obama.

Castro then took aim at his party’s frontrunner for the Democratic nomination.

“Barack Obama’s vision was not to leave 10 million people uncovered. He wanted every single person in this country covered. My plan would do that; your plan would not.”

When Biden responded that his health care plan didn’t require people to buy in, Castro repeatedly accused Biden of “forgetting” what he just said — a striking comment that seemed to allude Biden’s age, an issue that candidates for the most part have avoided on the national debate stage.

Biden, 76, took aim at several progressive candidates “Medicare for all” plans, but the skirmish with Castro was the most direct — and the most personal.

“I’m fulfilling the legacy of Barack Obama and you’re not,” Castro said.

“That’ll be a surprise to him,” Biden responded curtly.

But Biden didn’t say Thursday that people would be required to opt into his healthcare plan, as Castro claimed. Rather, he said, “anyone who can’t afford it gets automatically enrolled in the Medicare-type option we have.”

Still, health care wasn’t the only issue Castro and Biden tussled on. Later, Univision anchor Jorge Ramos turned to immigration — eventually asking the former vice president why Latinos should trust him given the high number of deportations that took place under Obama’s leadership.

Biden, in response, said it was “outrageous” to compare Obama and President Donald Trump’s immigration records.

“Did you make a mistake with those deportations?” Ramos asked Biden.

“I’m proud to have served with [Obama],” Biden responded, though he avoided criticizing the former president and essentially said Obama did the best he could.

When Ramos pressed the Democratic frontrunner on whether the Biden himself could’ve done more, he responded matter-of-factly: “I’m the Vice President of the United States.”

This, again, drew a rebuke from Castro, who accused the former vice president of selectively picking and choosing when he wants to align himself with Obama’s policies.

“He wants to take credit for Obama’s work, but not have to answer any questions,” Castro said to applause from the studio audience.

“I stand with Obama all eight years — good, bad and indifferent,” Biden shot back.

Castro, whose poll numbers placed him near the bottom of the list of candidate on the stage Thursday night, has taken a confrontational approach in each of the three Democratic debates thus far. In the first debate in Miami, he tussled with fellow Texan Beto O’Rourke over immigration. At the second debate, Biden and Castro exchanged blows in Detroit over immigration and decriminalizing improper crossings of the U.S. border.

After Thursday’s exchange over health care, South Bend, Indiana Mayor Pete Buttigieg pointed to it as an example of the political squabbling that Americans are tired of, drawing blunt disagreement from Castro.

“That’s called a Democratic primary election,” Castro said. “This is what we’re here for.”