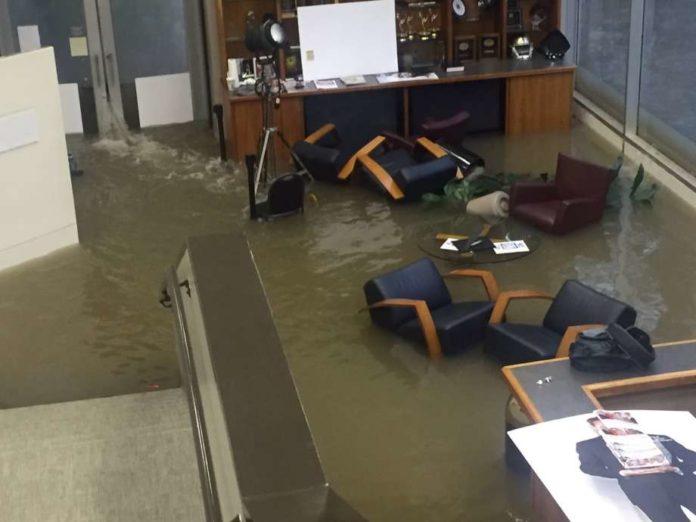 According KHOU-TV the station’s operations will not be returning to its long-time location along Allen Parkway. The station had moved into the location on April 24, 1960.

In a statement shared on the station’s website, KHOU President and General Manager Susan McEldoon spelled out plans for the foreseeable future.

“I recently shared with KHOU staff plans for our operations going forward. As you know, KHOU evacuated from our building at 1945 Allen Parkway during Hurricane Harvey. Within hours, we began working from Houston Public Media.

They graciously welcomed us in and we plan to stay until we move to a new, permanent space. We will be able to announce more details on our permanent location in early first quarter of the New Year.

Our team has shown incredible resilience and flexibility during this time. As I recently reminded them, a building does not make a TV station. Our people do. We are proud to stand with the community as we rebuild together and thank all of our viewers and customers for their continued support.”

On Sunday, August 27 as flood waters from nearby Buffalo Bayou surged, the station was forced to move its live coverage of Tropical Storm Harvey flooding to a second floor conference room. Soon the situation grew more dire and in Facebook Live footage employees could be seen evacuating the building soon after and grabbing possessions from the station offices.

The station has been headquartered for decades along Allen Parkway, just west of downtown Houston.

Up until the hurricane, KHOU was the last local station in Houston to have its headquarters so close to downtown.

Since the hurricane, broadcasting has been originating from temporary facilities at the Melcher Center for Public Broadcasting on the campus of the University of Houston. Technical assistance has come from other stations around the state as needed.

KHOU was licensed to Galveston and began broadcasting on March 23, 1953, under the call letters KGUL as the Houston area’s second TV station. The call letters were changed in 1959 to KHOU.

News icon Dan Rather, who parlayed his work at KHOU in the early ’60s into a long career at CBS News, getting national attention for his groundbreaking coverage of 1961’s Hurricane Carla along the Gulf Coast, once roamed the halls of the Allen Parkway building.

The plan was to set up inside the weather bureau in Galveston ahead of the storm. Carla hit just below the island and Rather and his team were the lucky ones. He was able to report directly from the scene while other Houston outlets were sealed off from Galveston.