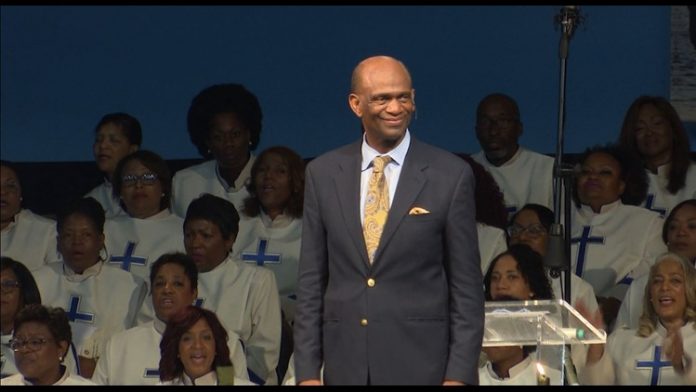 Just days after being charged by federal authorities, Houston Pastor Kirbyjon Caldwell got up in front of his congregation this Easter Sunday telling them he is not guilty of defrauding investors of over a million dollars.

Pastor Caldwell addressed the allegations against him at his Easter Sunday service, calling them a “painful pit stop” in his journey to the Promised Land.

He says he has evidence to prove he is innocent, and his congregation is standing behind him.

“Because I know this is not who he is,” Parishioner Margaret Levy said.

With conviction and confidence, parishioners of Windsor Village United Methodist stand behind the man they call their pastor.

“Pastor Caldwell is a man of integrity, I’ve never had a reason to doubt anything about him, anything he has done for the community or for the Church for that matter,” Parishioner Keshe Kluesner said.

“As you know I’ve been in the news lately,” Pastor Kirbyjon Caldwell said Sunday to his congregation.

His scripture laced with references to his current struggle, Caldwell addressed the allegations against him.

“From my mouth to your ears, I am not guilty,” Caldwell said.

Saying he has evidence to prove he is innocent of what court documents say he did – defrauding investors of over a million dollars by selling them historical Chinese bonds that authorities say have no value.

Using his Easter service to instill confidence in his congregation, Pastor Caldwell even brought his lawyerto the stage to speak to a congregation who appears to be already convinced of his innocence.

“I feel that he will absolutely be exonerated to the 100th degree, it’s just a matter of time,” Kluesner said.