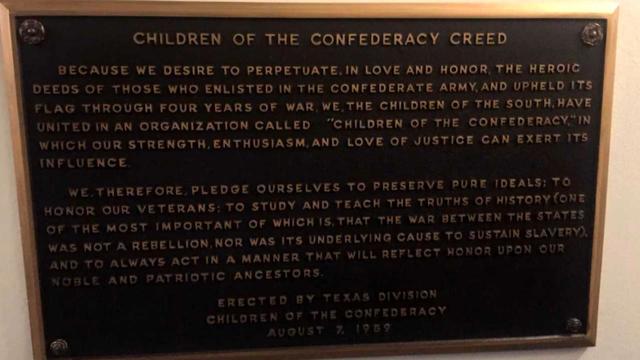 Texas state Rep. Eric Johnson (D) is formally calling on officials to remove from the state Capitol complex a plaque meant to honor the Confederate cause and perpetuate false narratives about the Civil War.

Johnson submitted a formal “change request” Tuesday to Rod Welsh, executive director of the State Preservation Board, urging the agency to relocate the marker from outside his Capitol office.

“I have taken every step legally necessary to request that this historically inaccurate plaque be removed from the Texas Capitol,” Johnson said Tuesday in a statement. “It’s now time for the State Preservation Board to act, and I look forward to its favorable and expeditious consideration of my request.”

The plaque, titled “Children of the Confederacy Creed,” was first hung in the halls in 1957 and features lines written by a white supremacist organization formed in the late 19th century to promote Confederate ideals.

The creed inscribed on the plaque features the group’s pledge to “perpetuate, in love and honor, the heroic deeds of those who enlisted in the Confederate Army.” The creed also vows to “teach the truths of history” and does so by peddling the false claim that the Civil War wasn’t directly tied to slavery.

“The war between the states was not a rebellion,” the plaque states, “nor was its underlying cause to sustain slavery” ― a theory that has been thoroughlydebunked many times.

Johnson submitted the official request just before he’s set to meet with Texas Gov. Greg Abbott (R) on Friday to discuss the dozen or so memorials to the Confederacy located around the Texas Capitol.

“This issue is not a partisan one,” Johnson said in a statement Tuesday. “The plaque is indefensible from a historical standpoint.”

“I trust that Governor Abbott, in his role as Chairman of the State Preservation Board, will come to the same conclusion … I did and call for the plaque’s immediate removal,” he added.

Texas House Speaker Joe Straus (R) called for the plaque’s removal after Johnson initially made an informal request in August.

“The plaque … is not accurate, and Texans are not well-served by incorrect information about our history,” Straus wrote to the State Preservation Board last month. “We have an obligation to all the people we serve to ensure that our history is described correctly, especially when it comes to a subject as painful as slavery.”

Representatives for both Welsh and Abbott did not immediately return HuffPost’s request for comment.