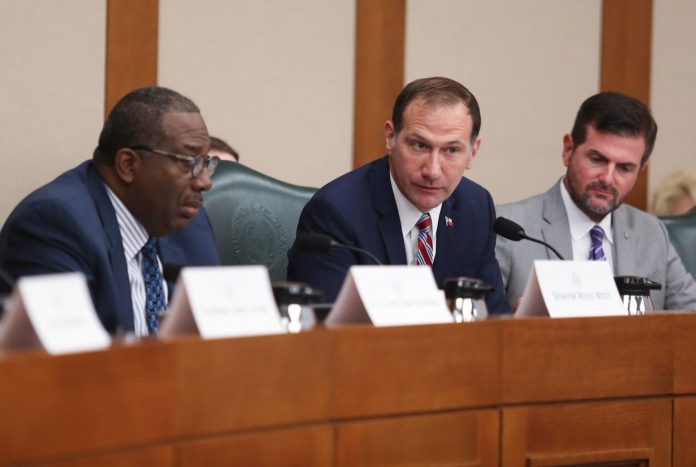 Nearly three weeks after a shooter killed 10 people at a high school southeast of Houston, lawmakers gathered at the Texas Capitol on Monday to discuss new school safety measures that might prevent another tragedy — and stopped short of rallying behind ideas like adding metal detectors to schools or updating school architecture.

“It’s going to be very difficult to stop every incident,” said state Sen. Larry Taylor, R-Friendswood, discussing the variety of situations in which students could be harmed.

Monday’s meeting came after Lt. Gov. Dan Patrick, a Republican, created the Senate Select Committee on Violence in Schools & School Security to study ways to limit violence in Texas public schools before they reopen in August. Prior to those orders, Abbott had released a 40-page school safety plan with dozens of proposals of his own in response to the shooting at Santa Fe High School.

Lawmakers studied many of Abbott’s ideas Monday, including ensuring that teachers are trained through Mental Health First Aid, a day-long course that trains individuals on how to spot and respond to mental illness and substance abuse. State Sen. Charles Schwertner, R-Georgetown, said around 25,000 school staff members in Texas have already been trained through the program.

“So much of this is mental health related, if not most of it,” said state Sen. John Whitmire, D-Houston.

Attendees also proposed putting sensors on school doors in order to make sure teachers and students don’t prop doors open for outside people to walk in. Taylor said having cameras on those doors can help school officials know who left the door open, resulting in possible punishment for either the student or the teacher.

But lawmakers were divided on other ideas.

The use of metal detectors in schools was a recurring theme in Monday’s hearing, where state Sen. Joan Huffman, R-Houston, suggested that the machines could curb school shootings.

“No one wants to talk about metal detectors but that’s the only way to keep guns out of the schools,” Huffman said.

But other lawmakers, including Taylor, who chairs the committee, called metal detectors a “complex issue,” particularly  since screening students could leave large groups of them waiting outside — making them targets.

Mike Matranga, executive director for security and school safety at Texas City ISD, said he worried about those crowds at school entrances.

“If someone is determined to cause chaos — they’re gonna do it,” Matranga said.

Others said they worried that metal detectors might be an intimidating presence in the schools. But Bob Podhrasky, a senior vice president for the Texas-based company Garrett Metal Detectors, said the goal is to intimidate people not to carry weapons.

“[Intimidation] may to be a good thing,” Podhrasky said.

But lawmakers didn’t immediately indicate how they might pick their favorite ideas. When Abbott listed off his proposals, he said legislative action was needed for many of them. He also said he was open to the idea of calling a special session of the Texas Legislature to pass proposals before school starts this fall, but only if lawmakers showed some “consensus on some laws that could be passed.”

The committee will meet again Tuesday to discuss other ideas Abbott has raised, including mental health screenings and arming school personnel.