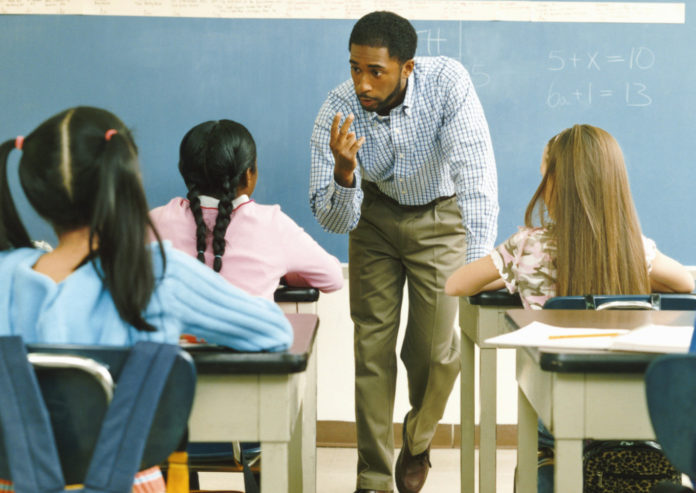 Every class period, Kassandra Peterson sees at least one of her students fall asleep at their desk because they haven’t eaten a meal all day. The free lunches the school offers are often so bad, she says, some would just rather stay hungry.

Peterson teaches freshmen at Cesar Chavez High School, a school in Houston ISD where 69% of the students qualify for free or reduced lunch. She said many of her kids come to school with problems that students in wealthier districts don’t have to worry about — like where they’ll get their first meal of the day.

That’s why Peterson, who’s in her second year of teaching, started purchasing several boxes of Pop-Tarts every two weeks, so that when a student falls asleep in class she at least has something to offer them. She spends nearly $100 a month on the Pop-Tarts boxes alone.

“One of the things I hate is that people paint it as, ‘Oh, kids just get so much and they expect so much.’ No, you have no idea what these children are going through,” she said. “Don’t tell me these kids are entitled or that they think they’re owed anything. My kids are polite, and if they’re asking me for something, it’s because they pretty much need it.”

But that’s not all. Peterson also spends her own money on paper, since her school is going through a supply shortage as the end of the year approaches. As her kids get ready for final exams, she’s forking out money for big boxes of printer paper to make review packets for each student, on top of markers and cases of pencils.Teachers like Peterson are closely watching as state lawmakers in both chambers negotiate over a comprehensive school finance bill — House Bill 3 — that would increase per-student funding and lower tax bills. Before that bill can be signed into law by Gov. Greg Abbott, both chambers will first negotiate some of their key differences — like how hefty of a pay raise to give out and to whom.

The Senate wants to give a $5,000 pay raise to all full-time teachers and librarians; the House proposed $1,388 on average statewide for all school employees plus more for raises given at administrators’ discretion.

Talk of a substantial raise gives Peterson some relief. It would allow her to offset the out-of-pocket costs she racks up from buying more supplies for her kids. It would also mean she would get some wiggle room to spend extra money on lab supplies.

“We can’t afford the nice machines my kids read about that I worked with in the lab for years [in college] before this,” she said. “I want to do even more for my kids and design state-of-the-art curriculum with my industry background, but I might only be allowed to do so uncompensated.”

It’s not just Peterson. Public school teachers across Texas have long been frustrated with stagnant pay year to year.

On average, Texas teachers were paid a yearly salary of $53,334 for the 2017-18 school year, more than $7,000 lower than the nationwide average of $60,477, according to a report from the National Education Association released last month. That ranking puts the state in the middle range compared to every other state at the 27th highest average salary, which has gone unchanged since the 2015-16 school year.

Rena Clegg also knows what it’s like spending hundreds of dollars a month on school supplies to challenge her students with more creative projects.

She teaches art for third graders at an elementary school in Pflugerville ISD, where she has $500 per year to buy art supplies — a dollar per student — plus whatever money the school has in its budget.

Her kids are currently working on an art project where they have to build a robot sculpture using hot glue, cardboard and $75 worth of spray paint bottles. Once they’re done, the students then give their robots a finishing touch. But after a few classes, she ran out of paint.

“I went out and bought $50 more of spray paint to finish their projects, because I can’t just tell that next class of kids, ‘Sorry yours didn’t get painted, we ran out; you’re just out of luck,’” Clegg said. “I don’t think twice about spending the money on those kids, other than it’s unfortunate that I have to do it.”

The lack of funding has made her look for other ways to find money. In her 11 years of teaching at the elementary school, she’s applied for countless grants from educator-focused nonprofit groups, and she’s had 12 proposals accepted.

“These are kind of the things that we do, because it’s what’s best for the kids,” she said.

One recent grant was for specialized school supplies — like adaptable, squeezable scissors — for special needs students and students with disabilities. She’s also written three rejected grant proposals that would have covered cameras for her students, since the district pushes technology-based learning, though her school currently doesn’t offer photography classes. At her elementary school, all the five teachers per grade level are given $100 to split among themselves for consumable supplies — like, soil for science projects, or paint for art classes — to last the whole year.

That’s why she’s not the only one looking to nonprofit groups for additional funding.

“My sister-in-law is a teacher, my sister’s a teacher, I work with 60 educators and I have multiple teacher friends — almost everyone I know has done it,” Clegg said. “If they don’t do it every year, they do it every couple of years.”

Clegg has even resorted to GoFundMe-style fundraising websites for teachers, like DonorsChoose.org, where she can raise funds for field trips or supplies that she can’t get through grant proposals. She uses the site every year, most recently to afford pricey styrofoam cutters for a project.

If the project gets fully funded, Clegg said the site requires teachers to send thank you notes to those who donated and to take pictures of the project to prove that the supplies are being used.

“It’s one of the longer things I have to write,” she said, “but I’ve done so many now that I feel like I kinda know what I’m doing.”

Without those additional funding avenues, Clegg has to fork out thousands of dollars a year just to afford all of the supplies for projects and activities. The final price tag varies year by year, but last year, she collected all of her receipts from out-of-pocket expenses, and the total added up to nearly $2,000. Other teachers spend closer to maybe $500 a year, but because she’s an art teacher, the expenses are heftier, she said.

“It’s just what you do,” Clegg said. “Like, I’ve bought clothes for kids before when I knew their shoes were falling apart. We would truly do anything for our kids.”

For Amy Rogers, it’s not just about buying extra journals and notebooks for her third graders — though she does that, too. Rogers teaches writing at an elementary school in Tyler, where she often has to buy composition notebooks for nearly half the kids in her classroom every year.

But she also spends a pretty penny on a few yearly magazine subscriptions, including Zoo Books, National Geographic Kids and Ranger Rick. Those add up to about $100.

Rogers said her students enjoy being able to pick up one of the nonfiction magazines from her classroom library, which she funded straight from her pocket. Students often come up to her while reading to ask questions about some of the facts about the world around them.

“They get a better understanding of how things operate in the world,” she said. “It’s not just what happens in Tyler, Texas, you know. There’s a whole world out there that you can explore eventually.”

Though her school doesn’t help pay for the magazine subscriptions, Rogers said some of the school supplies she needs for her classroom will get covered by the administration — as long as she asks early in the year. This time of the year, they would say no. Those supplies (plus the subscriptions) can add up to nearly $150 a month.

A substantial pay raise, Rogers said, would mean having more peace of mind that she can keep buying stuff for her students, because she would finally have a more flexible budget. That would mean new software and apps for students when they get new computers and iPads from the school.

“A lot of teachers go into education knowing it’s a low-paying job, so they know that they’re going to have to dig a little bit into their own pockets,” she said. “I just don’t think many of them realize just how much really comes out of their pockets in the long run.”

Springtown Elementary in Springtown ISD, a district that’s nearly 40 minutes outside Fort Worth, doesn’t really have the budget to offer all its teachers the technology for extracurriculars they may need.

So, Kristie Smith buys them all herself.

She’s only given five Chromebooks per class, an insufficient amount for her group of around 30 second graders, so she bought seven Kindle tablets — which often go on sale and cost around $150 — to help even things out. She also lets students use an iPad with protections that limit access to only educational apps. But all the purchases add up — she spends nearly $300 a month on supplies.

“If I think they need something, or if we’re doing something in class and I think, ‘Oh my gosh, that would make things so much easier,’ then I just get it,” Smith, a reading and writing teacher, said. “I’m one of those that doesn’t like to see them go without.”

Smith is used to spending hundreds from out of her own pocket to make her classroom more inviting, enriching and welcoming. Though she’s only in her second year teaching, she isn’t right out of college like some of her peers — she’s spent years as a substitute and an aide before becoming a full-time educator. Last year, she spent close to $4,000 to cover things that usually don’t cross your mind during the first year of teaching, like laminating papers, buying furniture and setting up classroom decorations.

After those supplies come the extra things that can make class activities more fun, like the headsets she recently purchased that look sort of like phones and allow students to record themselves reading a page from a book and then play the recording back to themselves. This allows students — and Smith — to hear how they read out loud, so they can make adjustments and improve how they’re sounding out certain words and phrases.

For Smith, a big raise would mean she could finally achieve her goal of buying enough Kindle tablets to cover every one of her students in class. When the time comes for testing, she wouldn’t have to worry about how all 30 students will be able to take their test at the same time.

Right now, there is a computer lab available, but it’s always difficult to schedule testing reservations for every teacher in all grade levels throughout the year, and you can’t borrow any computers or technology from the library, she said. So, since every teacher is given five Chromebooks per classroom, the second grade teachers often pass around their stash so others can complete testing whenever it’s needed.

They’re used to thinking outside the box like that, though. Getting creative with what limited supplies you have is what you do when you’re a teacher, Smith said.

“We sort of all just make it work.”