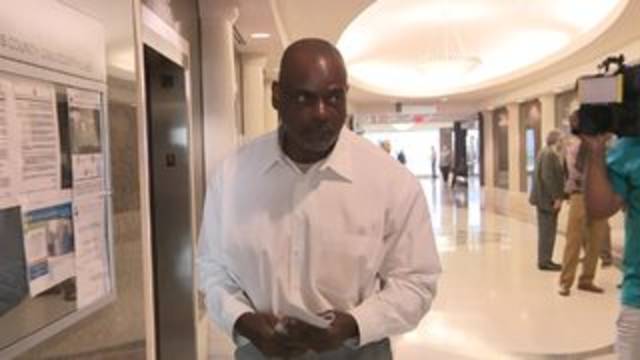 A former Houston police officer charged with felony murder in the deaths of a coupleduring a January drug raid on their home has a long history of serving the community and was only doing his job, his attorney said Monday.

Gerald Goines appeared in court for a brief court hearing to go over his bond conditions following his arrest last week. He remains free on bonds totaling $300,000. He didn’t speak during the hearing.

His attorney, Nicole DeBorde, told reporters afterward that she believes Goines was only doing his job and investigating a drug tip that led to the Jan. 28 raid in which 58-year-old Rhogena Nicholas and her 59-year-old husband Dennis Tuttle were killed and several officers were injured.

“He’s received many, many awards and commendations over the years for his excellent work in the community,” she said.

Prosecutors allege that Goines lied to obtain the warrant to search the couple’s home by claiming that a confidential informant had bought heroin there. Goines, who was shot in a gunfight during the raid, later acknowledged that there was no informant and that he had bought the drugs himself, they allege.

Goines was charged with felony murder because while committing the felony of tampering with a government document by lying about the informant, he created a dangerous situation that led to the deaths of individuals, according to prosecutors.

His partner, ex-officer Steven Bryant, is accused of trying to help Goines cover up the crime by allegedly providing false information in a report after the raid that supported Goines’ story about the informant. Bryant is charged with tampering with a government record and is free on $50,000 bond. He had a separate hearing on Monday, and his attorney, Andy Drumheller, didn’t immediately reply to an email seeking comment.

If convicted, Goines faces up to life in prison and Bryant faces up to two years in jail.

Family and friends of Tuttle and Nicholas have continuously dismissed allegations that the couple sold drugs. Police found small amounts of marijuana and cocaine in the house, but no heroin.

Attorneys for Nicholas’ family say an independent review they’re conducting has cast doubt on how the shooting during the raid took place.

Asked whether Goines lied about having a confidential informant to justify the raid, DeBorde declined to comment Monday, saying she wasn’t going to talk about “pieces of the facts” in the case.

“We really think the appropriate place to vet a criminal allegation is in the courtroom in front of a jury, not in front of the media,” she said.

Following the shooting, prosecutors began reviewing more than 2,000 cases tied to Goines and Bryant. In June, prosecutors said their investigation had grown into a probe of 14,000 cases handled by the Houston Police Department’s narcotics division.

The Harris County District Attorney’s Office said it was also investigating other claims against Goines that have been made by members of the public since the drug raid, including allegations of stealing money, drugs and guns.

Both Goines and Bryant were relieved of duty after the shooting and later retired.

DeBorde said Goines was shot in the face during the raid and lost part of his jaw. He faces ongoing reconstructive surgery to his jaw and face, and will require rehabilitation, she said.