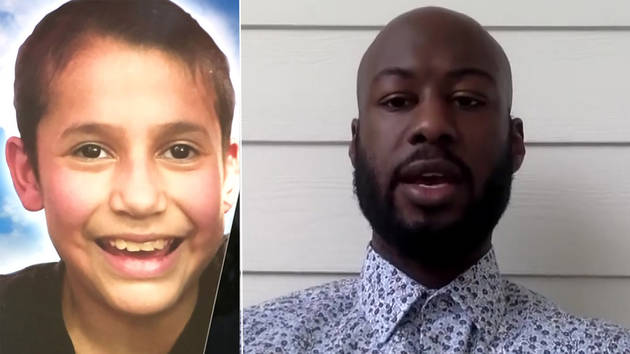 A huge twist occurred Tuesday in the case of Josue Flores, the boy who was stabbed to death while walking home from school in 2016.

Investigators said the 11-year-old boy was stabbed more than 20 times as he was walking home from Marshall Middle School in North Houston, but they are not sure why.

Authorities named two suspects, both of whom have since been released. The first was cleared by his alibi.

The second, a former Marine named Andre Jackson, was released in July 2017 after his arrest when investigators said DNA evidence made it impossible to prove beyond a reasonable doubt that he is responsible for the crime.

But District Attorney Kim Ogg announced Tuesday that Jackson was indicted in the case.

Acevedo has said he believes Jackson was the right suspect, but with the inconclusive evidence, investigators needed someone to come forward with more information.

DNA tests at the time, conducted at a lab in Utah, were inconclusive. The DA’s office dismissed murder charges against Jackson in 2017, but “he was never dropped as a suspect,” HPD Executive Assistant Chief Troy Finner said Tuesday.

“My items were tested in a DNA lab,” Jackson said in the YouTube video. “There was none of Josue’s on me, nor my items and vice versa.”

“When newly tested evidence became available, we were able to make a case to the grand jury that Jackson is, in fact, the murderer of Josue Flores,” Ogg said. “It’s our duty as prosecutors to seek justice, not just to obtain convictions. Because of the excellent investigative work … we now believe that we can bring justice to Josue’s family.”

Ogg said she is thankful to the people who helped with the case while Josue’s family waited for justice.

“A little over three years ago, our little young soldier was brutally murdered,” Finner said. “Chief (Art) Acevedo said over his dead body that we would give up on this case. … We stand here today with our mayor (and) other city legals, we worked together and the main point today is, he’s in custody. Justice is justice, even if it’s delayed.”

Houston police Chief Art Acevedo tweeted a statement that read in part, “For the past three years, our department has worked tirelessly to bring justice to Josue, the Flores family, and our extended community. Today’s true bill is a significant step in our journey for justice, and we look forward to supporting the Flores family as this case proceeds through the criminal courts.”

Mayor Sylvester Turner said the attack was brutal and unimaginable.

“Last Friday, I joined chief Acevedo in a visit to Josue’s family and talked with his mother to let them know about the new developments in this case,” Turner said. “We let Josue’s family know that he has not been forgotten and that this entire city continues to pray and work so that his death would not be in vain. For three years, HPD refused to give up. In fact, the community didn’t give up, the family didn’t give up and neither did we. Today, our community joins with Josue’s family in viewing this indictment as an important step towards justice for Josue.”

A motion was filed this month for HPD investigators to keep the clothing items seized from Jackson to continue to be used in the investigation.

KPRC has learned that the evidence tested for Flores’ DNA was a jacket seized from Jackson’s home after his first arrest.

Court documents filed by HPD this month revealed that a judge granted Jackson’s request for HPD to return belongings seized in 2016.

HPD agreed to return two cellphones and a purple spray paint can, but wrote that “clothing items seized from the defendant continue to be needed as evidence in the investigation.”

“To return those items now would materially interfere with the ongoing investigation into the death of Josue Flores,” the documents continued.

The jacket was retested in Florida after the HPD Cold Case Unit “learned about new technology.” The FBI helped pay for the new, advanced DNA testing.

Josue was stabbed more than 20 times May 17, 2016, while walking home from school in Houston’s Near Northside neighborhood.

A little more than a year after Josue’s death, a law bearing his name was passed. The Josue Flores Act provides funding for transportation of children who live within walking distance to schools in dangerous neighborhoods.