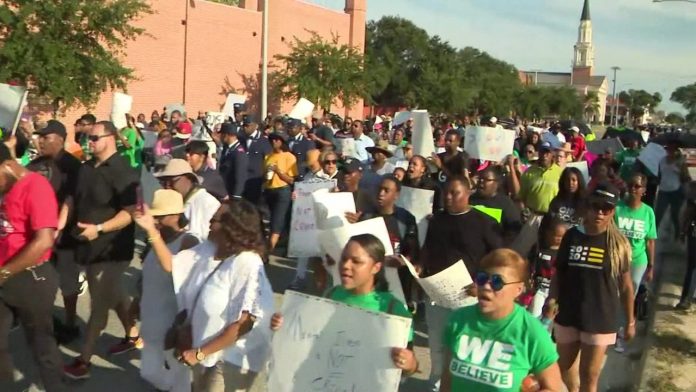 Video of Neely’s arrest went viral in August after two Galveston police officers were caught on camera leading the man by rope.

The images sparked outrage across the country.

During a demonstration Sunday afternoon, hundreds of supporters joined Neely’s attorneys call for police body camera video to be released to the public.

“Show us the police body camera video, so we can see this good character on full display when they interacted with Donald Neely,” said Benjamin Crump, Neely’s civil attorney.

They also demanded charges against Neely to be dropped, because he is mentally ill.

“These officers decided to take Donald Neely into custody in the most degrading and humiliating way possible,” said Melissa Morris, his criminal attorney.

“I respect those who participated in the walk today and value their fundamental right to free speech and peaceful assembly. We grow as a community by listening to each other.

“I understand why the image of Mr. Neely’s arrest upset many people. This photo conjured up strong emotions and can be seen as offensive or shocking, especially given the historical connotation.

“This is the method of transportation our mounted patrol officers learned in their training. Nonetheless, we want our practices to always reflect the core values of our department and our community. This is why as the police chief and as an agency we are committed to learning from this and continuing our efforts to ensure the department has the best practices and policies in place.

“The Galveston Police Department strives to serve with respect and integrity through continuous improvement.”