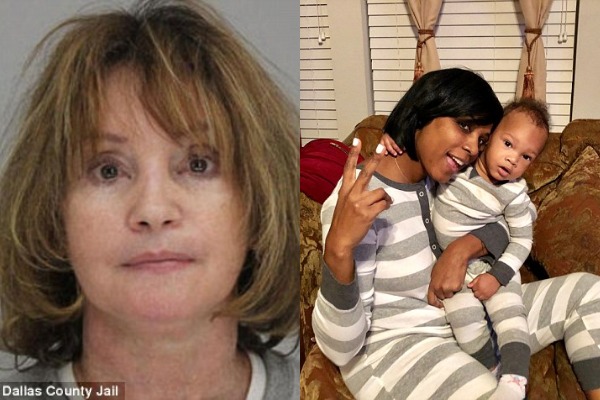 A mother says she trusted a Texas day care to look after her 2-year-old son, only to learn the owner had been abusing and not feeding him, along with several other children at the day care.

Detailing the horror, Ta’lor Oliver said her son Triston Oliver would come home with bruises, scratches and “severe” diaper rash after spending hours under the watchful eye of “Becky’s Day Care” owner Rebecca Anderson, according to The Daily Mail.

Anderson, 60 who was arrested last Saturday, did her best to hide the daily abuse from parents, until a hidden camera reportedly showed her unnecessarily medicating children and keeping them strapped in car seats all day.

“Every day I would drop [Triston] off and I would go to work [not] knowing that he could be in a closet or in a car seat for up to seven hours,’ Oliver told Daily Mail TV. “I know there were plenty of times when I picked him up and he’d be hoarse, and I never thought that that would happen.”

According to NBC Dallas-Fortworth, police were tipped off after the father of a 6-month-old boy strapped a camera to his car seat. Police said the video showed Anderson yank the boy out of his car seat, use the bib around his neck to pick him up off the ground and then feed him an “unknown substance using a plastic liquid syringe.”

Anderson initially told police there were only five children at her home day care in Mesquite. During their search of the home, however, investigators found four more children. Three of them were strapped to car seats in a darkened master bedroom closet and the other in the master bedroom. Moreover, an arrest warrant detailed “shoe-lace like” ligatures tied around the children’s necks — some of which had to be cut off.

Anderson later confessed that she’d likely “given Tylenol to all the children” and said she remanded the children to their car seats for over seven hours a day.

Oliver told Daily Mail she never imagined her son being abused by the “sweet” day care owner, but has since realized all the “red flags.”

“Everything just seemed OK that I would trust her enough to let my son go there,” she recalled. “‘The reviews were good, when I went to meet her, her house was super clean. When I brought Triston with me, she kinda let him roam around, she showed me all the rooms.”

However, Oliver said she noticed a change in her son’s behavior after spending just a few days at Anderson’s day care center. She said he would come home tired and hungry with bruises and abrasions on his body. When she came to pick him up, he would sprint out of the door, eager to go home.

Initially, Oliver said she gave the caretaker “the benefit of the doubt” and didn’t question the bruises. Her stepmother, Keonna Johnson Oliver, was still concerned and confronted Anderson about her grandson’s injuries, which the caretaker chalked up to “roughhousing” among the kids.

Anderson has since been charged with nine counts of child endangerment and faces a $5,000 bond for each charge, online jail records show. She’s currently being held at the Dallas County Jail.