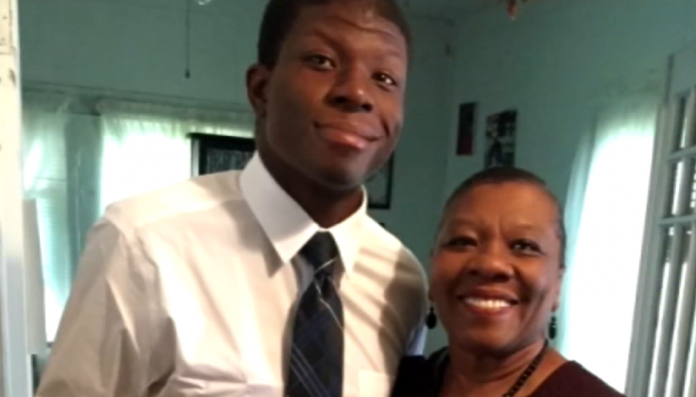 Through tears, the grieving mother of a U.S. military veteran said she has no hate in her heart for the gunman who cut her son’s life short.

“Yes, I forgive him,” Mary Brown told Texas station KTXS-TV of suspect Seth Ator, who killed seven people and injured dozens of others, including a 17-month-old child, in a shooting rampage in Odessa, Texas, on Saturday. Brown’s son, Army veteran Kameron Brown, was among the victims.

“He had to go fight in a war and come back here to be killed senselessly,” his mother told the outlet. “It’s so unfair. We can never get him back.”

According to KTXS, the former soldier was headed to work in Odessa when a  single bullet pierced the window of his truck, killing him.

Ator, who had a criminal past, was reportedly upset over his recent firing from a trucking job and lead police on a deadly chase across Midland after troopers tried stopping him for failing to signal while driving on I-20. The 36-year-old fired at officers from his car and sped off before subsequently hijacking a mail carrier van and killing the postal worker, and he then began firing indiscriminately at pedestrians and other motorists with an AR-15-style rifle authorities say he should’ve never been able to legally obtain.

In a tweet, Texas Gov. Greg Abbot lamented that “Not only did the Odessa gunman have a criminal history … he also previously failed a gun purchase background check in Texas. [And] he didn’t go thru a background check for the gun he used in Odessa.”

“We must keep guns out of criminals’ hands,” he added.

Police eventually caught up with Ator in the parking lot of an Odessa cinema, where he was shot and killed by authorities.

By that time, the gunman had killed a total of seven people and wounded at least 25 others. Brown’s brother, Carlton Brown, recalled the moment he got word via text message that Kameron died in the rampage.

He said the news crushed their mother.

The family is now planning for Brown’s funeral. Relatives remembered the Afghanistan War veteran as someone who was “always joking all time” and who loved to make others smile.

As the family continues to grieve, Mary Brown said she’s thankful for the memories and mementos of her slain son.

“That’s all I have now,” she said. “The pictures and the memories. And thank god no one can take that away.”

A GoFundMe page has been launched to help with Kameron’s funeral expenses.