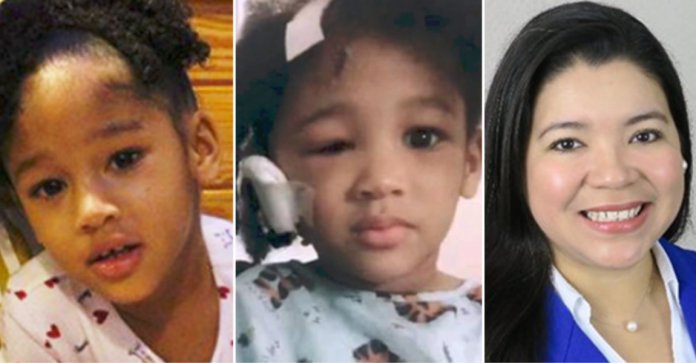 Houston residents are directing their anger at a judge who returned 4-year-old Maleah Davis to her abusive home in February. Maleah had been missing from that home for over a month. On Friday, Maleah’s remains were recovered in Arkansas and flown back to Houston on a private jet.

In a jailhouse interview with community activist Quanell X last week, suspect Derion Vence, 26, who was engaged to Bowens, said he killed the girl accidentally and dumped her body in Fulton, Arkansas, just over the Texas state line. Vence is being held on $45,000 bail.

A road crew detected a foul odor and discovered a black trash bag containing a child’s bones and blood-stained clothing on Friday.

A coroner is working to determine the child’s cause of death.

State District Judge Gloria Lopez is under fire for returning Maleah to her mother, Brittany Bowens, after the 4-year-old suffered a traumatic brain injury at home.

Bowens told CPS her daughter hit her head on the corner of a table during breakfast. Maleah required at least 3 brain surgeries to reduce intracranial pressure in her skull.

Despite a CPS’s decision to keep Maleah and her 2 brothers in foster care, Judge Lopez ordered the children returned to their mother in February.

Lopez had been sworn in as a judge just one month before the hearing. Lopez, 33, was a family attorney prior to running for election in Houston.

In May, Judge Lopez, a Democrat, signed a CPS gag order preventing details from being released to the public as she continues to preside over the CPS case involving Maleah’s 2 brothers.

As a result of public pressure, Hank Whitman, the former Texas Ranger in charge of the Department of Family and Protective Services, announced his decision to step down and retire early.

But Maleah’s supporters are outraged that Judge Lopez continues to oversee the CPS case.

Angry Houston residents took to social media to call for her impeachment from the bench.

A memorial to Maleah can be seen just off exit 18 along Highway I-30 in southwest Arkansas.

Hempstead County Sheriff James Singleton and his family placed a pink cross and pink unicorn at the memorial on Sunday, KTBS reports.

Another memorial continues to grow outside the abandoned apartment at 9850 S. Kirkwood Road where Maleah once lived with her family. The apartment is uninhabitable after forensics officers ripped out plumbing and sprayed a reagent chemical everywhere in search of blood evidence.

The Kirkwood Landing apartment complex in Houston has become a morbid destination for heartbroken strangers who traveled from all over Texas to grieve for a child they’ve never met.