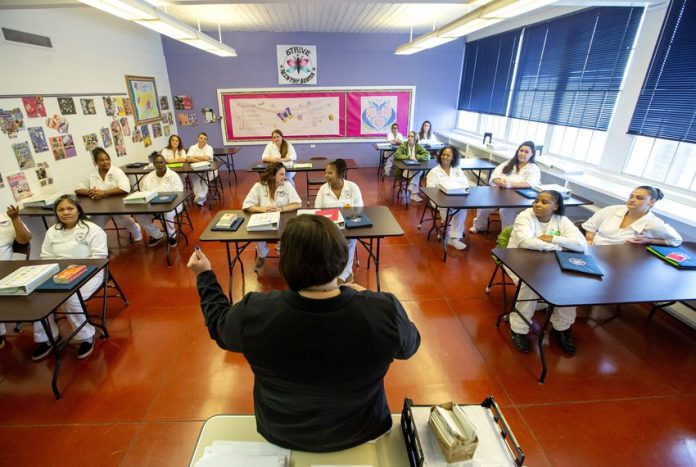 Tears often filled the eyes of the women in this Texas prison town as they prepared for their upcoming release from the system after years or even decades of incarceration.

The women sometimes wiped them away as they recalled trauma and grief they’d long ignored in a harsh prison environment. But their eyes also welled up when they expressed gratitude for a new program they hope will keep them from ever coming back to this or any other lockup.

At the Mountain View Unit west of Waco last week, the Texas Department of Criminal Justice unveiled STRIVE, a new reentry program for women soon to be released from prison. Its main goals are to help imprisoned women address and heal from trauma tied to their criminal activity and leave prison with jobs already waiting for them. It’s a small program, with only 31 women in the inaugural class, and lasts a relatively short 12 weeks. But in the four weeks since it began, women said they felt changed.

“We’ve done healing trauma, opening up stuff we’ve already left there for a long time, stuff we don’t usually like to talk about,” said Candice Diaz, 29, her eyes misting as she logged on to a work-resource website in a prison computer lab. “It opened up a lot of doors. The other units, it’s just prison.”

Diaz said she has been in and out of custody since she was 17. She’s currently serving a three-year stint after violating probation conditions handed down when, at 22, she and five men were convicted in an aggravated assault and robbery.

Looking back on her past, Diaz largely blames drug addiction and a childhood spent enduring abuse and abandonment. She wants better for her children, ages 14, 11 and 3, who she says have already noticed her growth in the program when her mother brings them to visit.

“[Before,] I would come out, and it wasn’t enough to provide for my kids,” she said, referencing her turns back to criminal behavior. “Now I don’t have to do that. I don’t have to worry about getting a job or where I’m going to sleep.”

Diaz is set for release on parole in December and already took a prison class on business computer systems before STRIVE. She hopes to get work as an office administrator or receptionist, she said. And although she had eight weeks left in the program, she was online last week looking at job postings.

“I felt like I was at home,” she said, laughing, about first logging online in the program — the first in TDCJ to provide internet access, according to officials. “I got my own Gmail account!”

More than 12,000 women were incarcerated in Texas prison facilities as of August 2018, and nearly 11,000 were released from state custody in the preceding year, according to TDCJ. Texas has a relatively low recidivism rate compared with other states, with about 20% of those leaving state prisons being reincarcerated within three years. That number is 15% for women. (More than 40% are rearrested within the same time frame.)

But the increasing number of women in a male-dominated prison system has raised criticism over a lack of opportunities at women’s prisons. This year, state lawmakers passed multiple bills to improve gender-specific services, including a measure requiring the agency to adopt more educational, vocational and reentry programs geared toward women.

With the creation of STRIVE, an acronym for Strength Through Restoration, Independence, Vision and Empowerment, prison officials said they chose women they determined would have a higher risk of ending up back in prison without additional support. It’s free for the women, and officials said the agency hired a couple of new employees, though it’s mostly run with existing staff and equipment. As the program grows — the agency aims to double it by the end of the year — officials said women in state prisons will be eligible if they aren’t in high-security custody or other treatment programs.

A key goal of the program is for each woman to have a job waiting for her when she gets out, according to TDCJ’s executive director, Bryan Collier. Part of the full-day programming focuses on computer and office skills, practicing interview techniques, customer service training, and dealing with stress and safety in the workplace.

The women are also given internet access to look for jobs, set up professional email accounts, and work on their resumes and portfolios. The program will host a job fair in November, and each woman will leave prison with a work portfolio and at least one professional outfit, according to prison officials.

But criminal justice reform advocates often note that employment is not the only key to success outside of prison. Often, women must also be able to form new relationships with their children and address the trauma or problems that landed them in the system in the first place. A 2018 report from the Texas Criminal Justice Coalition found 58% of women in Texas prison facilities said they were sexually abused or assaulted as children, and 82% said they had experienced domestic violence or dating abuse.

“Our interest and our focus is just on helping them succeed, giving them the tools that they need and giving them the support so that we have a good handoff,” Collier told agency staff and volunteers in the prison’s chapel last week. “Jobs is a critical piece of that, but that’s not all of that.”

The other major part of the program is a trauma-informed class that lasts more than three hours a day. It pulls from curriculum tailored toward women in the criminal justice system and is taught by Patricia Ryan, a former prison sergeant who is now a case manager. She teaches coping strategies, self love, and the difference between healthy and unhealthy relationships. But progress starts with getting the women to open up about their long-buried wounds.

“We start talking and they start realizing, ‘Oh, it really did affect me,’” Ryan said in the prison’s short STRIVE hallway soon after having to practice relaxation with a woman who began crying in her classroom. “Many of these women, they did their drugs or they drank to mask that pain.”

She said one hurdle to overcome is that these women spent years in prison, where the mentality is often to look out for yourself and not offer or ask for help.

“We had to get them out of the TDCJ mindset,” she said.

More than a number

Sylvia Rice, 40, has been in prison since she was 19. She was sentenced to 25 years in 1999 for murder, convicted for her involvement in her grandmother’s death. Her boyfriend at the time, the father of her two children, the first of whom she had at 15, lived with Rice and her grandmother. He shot the woman twice in a planned attack motivated by money, according to Rice’s sister.

Rice, who is quick to smile and toss her head back in deep laughter, choked up when talking about her grandmother’s death, saying it still “eats me up.” But the program has helped her atone for her crime and not be defined by it, letting her instead plan for a future in which she hopes to help others.

“I was so insecure, and I thought he was the only man who would ever love me,” she said of her children’s father. “A lot of times with women, it’s hard for us to move on, so we go to the relationships we were in. … [Ms. Ryan] wants you to be the woman you can be.”

Rice’s sister, Katharin Rice-Gillis, told The Texas Tribune last week that they were abused and raped as children in foster care before their grandmother adopted them. Although Rice-Gillis turned to the military, her younger sister walked a different path.

When she first got to prison, Rice said, she acted out and took on a tough prison personality. But she grew. She worked for years on rebuilding her relationship with her sister and joined a faith-based healing program. She was granted parole this year. At first she was anxious as her December release date approached.

“I didn’t know how I was going to function in society because I’ve been here some two decades,” she said.

Now she laughs while retelling stories of learning in STRIVE how to turn on the computer and use the internet.

“I’m learning to do emails!” she yelled excitedly. “I did my first email yesterday!”

The living area for students in the STRIVE reentry program inside Mountain View prison in Gatesville features motivational quotations on the walls. The air-conditioned dorm houses women participating in the new program.  Marjorie Kamys Cotera for The Texas Tribune

The practical skills are crucial to Rice, but the emotional treatment and community are paramount. In STRIVE, the 31 women rotate through three classrooms in their own wing of the prison. They all live in one dorm, marked at the door with a sign that says “You are about to enter an empowerment zone.”

The bright white walls of the dorm, which unlike most of the unit is air-conditioned (a point excitedly highlighted by Diaz), is covered in inspiring messages and bulletin boards filled with information on employee rights.

And though the STRIVE women are still dressed in typical prison whites, their shirts have a key distinction: their names are sewn onto them.

“Being allowed to go into the STRIVE program kind of humanized her and made her feel like she mattered for the first time in 20 years,” Rice-Gillis said of her sister. “They no longer refer to her as Inmate 86-whatever, they call her by her name.”

Advocates who have highlighted gender disparities in the prison system are encouraged by the creation of the STRIVE program, but it’s the initial “prison mindset” and treatment outside of the program that concerns them. The reentry process should start on day one of incarceration, they say, not 12 weeks before release.

“It sounds great, the problem is it’s starting too late,” said Michele Deitch, a senior lecturer at the University of Texas at Austin law school who studies prison and jail conditions, especially for women. “If things had been happening to them for the last 21 years while they’ve been locked up, and they’ve been treated a certain way, and now we’re going to start treating you differently… we’re relying on this last 4 months to do all of that hard work.”

Ryan acknowledged 12 weeks is a short time frame for substantial healing after so long in the prison system, but said she had already noticed growth in four weeks. And, she said, it doesn’t end for her at 12 weeks — the women can continue to reach out.

Lindsey Linder, a policy attorney and author of the report on women in prison for the Texas Criminal Justice Coalition, said the program seems like a good pilot, but she hopes it can grow exponentially to include more than just 31 women at the very end of their sentences.

“It’s great that they’re doing this, and I think we need more and more and more of this,” she said. “I don’t see any reason why this needs to be a short term, pre-release program — I think it should just be the way we respond to people in the system.”

Prison officials said they hope to further grow STRIVE, and that the initial program will be tweaked as they learn from their first class of women. For those in it now, however, confidence is high.

“I’ll bet you anything these women are not going to come back,” Rice said, smiling.