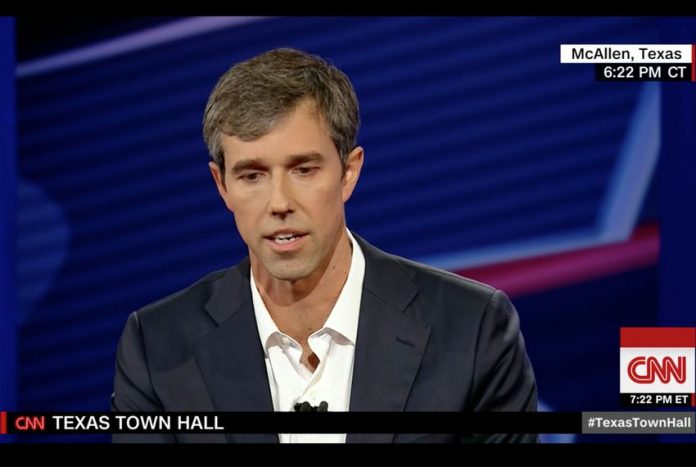 Beto O’Rourke, the Democratic nominee for U.S. Senate, expressed some regret Thursday evening for using the infamous nickname “Lyin’ Ted” during a recent debate with the Republican incumbent, Ted Cruz.

“It’s not something that I feel totally comfortable with, and perhaps in the heat of the moment I took a step too far,” O’Rourke said during a CNN town hall in McAllen. Asked by moderator Dana Bash if he regretted his reference to the insult, O’Rourke hesitated, then told her, “I don’t know that that’s the way I want to be talking in this campaign.”

O’Rourke’s unease follows a negative turn by his campaign in recent days, as polls have shown Cruz extending his lead. In addition to his swinging harder at Cruz on the debate stage, O’Rourke’s campaign came out with a trio of anti-Cruz ads the next morning, breaking further from the positive campaign he has long vowed to run.

During their debate Tuesday in San Antonio, O’Rourke sought to push back on Cruz’s attacks by deploying the nickname, which Donald Trump used against Cruz in their bloody battle for the 2016 Republican presidential nomination.

“He’s dishonest,” O’Rourke said of Cruz. “It’s why the president called him ‘Lyin’ Ted’ and it’s why the nickname stuck — because it’s true.”

O’Rourke told Bash that he did not plan to bring up “Lyin’ Ted” at the debate but nonetheless entered it determined to rebut Cruz’s attacks more forcefully. The senator responded to O’Rourke’s use of the term at the debate by claiming it is “clear Mr. O’Rourke’s pollsters have told him to come out on the attack.”

“That’s another lie,” O’Rourke told Bash. “I don’t have a pollster.”

The hourlong town hall on Thursday did not include Cruz. He declined to appear back-to-back with O’Rourke at the event but sought in recent days to turn it into a debate. That did not work out, and Cruz instead spent Thursday campaigning in Dallas.