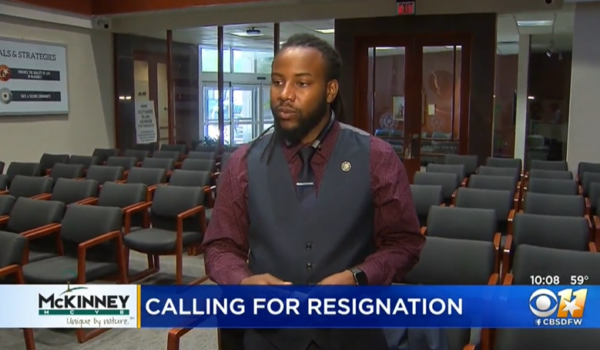 A McKinney, Texas, councilman is facing a call for his resignation following “divisive” comments he made in response to the fatal shooting of Atatiana Jefferson.

On Friday, Council member La’Shadion Shemwell called for a “black state of emergency” in Texas after 28-year-old Jefferson was shot and killed by a Fort Worth officer in her mother’s home on Saturday, Oct. 12. The premed student was up playing video games with her nephew when then-officer Aaron Deanshot her through a window of the home.

Dean has since resigned and is now charged with murder in Jefferson’s death.

Like many in Dallas-Fort Worth community, Shemwell was outraged by the shooting — the seventh by Fort Worth police since June 1, according to the Fort Worth Star-Telegram. In his Twitter declaration, he accused the state and local  demonstrating what he called “a pattern and practice of discriminatory and biased conduct … which deprives black and brown citizens rights protected under the Constitution.”

He further pointed to the racial bias exhibited by police, noting how officers killed Jefferson, who was Black, “without any provocation, justification, or proper warning.”

Shemwell also brought up the deadly shooting of Botham Jean, who was killed by a white female officer who allegedly mistook his apartment for hers, along with several similar instances of people of color being gunned down by the police.

“Now therefore, we, the citizens of Texas declare a Black State of Emergency bearing especially on black and brown citizens living in / traveling through Texas,” the document reads.

Shemwell’s declaration drew swift criticism from the local police union, the McKinney Police Association. The union’s president, Christopher Kennedy, accused the controversial councilman of trying to drive a wedge between the city’s residents and police.

“Through this divisive rhetoric Councilman Shemwell is discouraging people of color from visiting the State of Texas,” Kennedy said in a statement obtained by CBS11.

“The statements by Councilman Shemwell were contentious and only sought to create disconnect between the citizens and the police departments that serve them,” he added. “Unfortunately, this behavior is what we have become to expect from Councilman Shemwell, as he has continuously chosen to insert himself as a public agitator both in McKinney and the City of Dallas. This discourse negatively affects the State of Texas, McKinney citizens, and the McKinney Police Department.“

A lawyer for Shemwell, the council’s sole Black councilperson, responded Wednesday and chided the MPA for ignoring “this very real fear that many black families face with daily” to attack the councilman.

“Councilman Shemwell has been a staunch advocate for police reform,” attorney Kim Cole wrote. “Councilman Shemwell’s proclamation was not about MPA. But they took it upon themselves to disparage him nonetheless. Thus, Councilman LaShadion Shemwell’s response to McKinney Police Association’s call for his immediate resignation is simply, “You first.”

Shemwell’s declaration calls on police to update their use of force laws, require additional training for all law enforcement officers and establish a Racial and Identity Profiling Advisory Board, among other things.