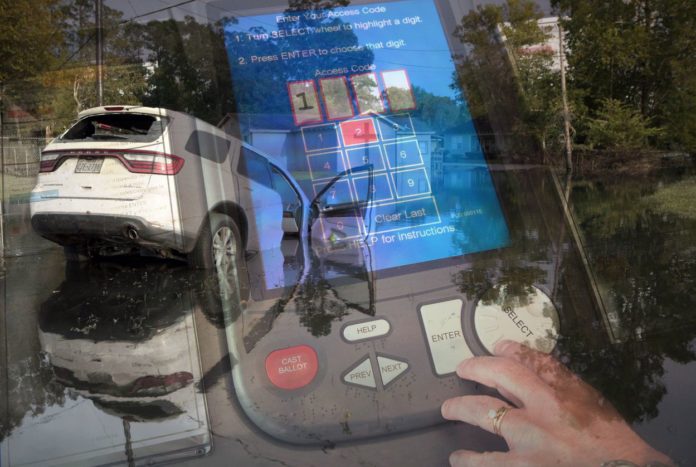 The latest drama involving President Donald Trump may dominate the political conversation in every major America city, except one – Houston. There, where a handful of congressional races are heating up ahead of the Texas March 6 primary, there’s another name on voters’ minds: Harvey.

In Texas’ largest city and its suburbs, incumbents and candidates alike are making the case to voters that they can best represent a region that continues to reel from last year’s devastating hurricane.

“It seems likely that this issue of the flooding will be an issue both in the primary and in the general, particularly for Congressional candidates,” said Bob Stein, a Rice University political scientist.

There are at least three Houston-area U.S. House races where Harvey is emerging as a leading issue: the open seats to replace retiring U.S. Reps. Ted Poe, R-Humble, and Gene Green, D-Houston, and Republican U.S. Rep. John Culberson‘s re-election bid, which Democrats see as a top Texas target in 2018.

In both places, candidates are asked the same questions over and over again: How does the city get back on its feet, and how can a future disaster be prevented?

An immediate worry in Houston is whether the Texas congressional delegation can get the rest of Congress to allocate billions more dollars in relief for the region.

Congress previously passed funding to help Texans rebuild, but it was only a fraction of what officials say they need. The state delegation spent much of the fall lobbying for billions more.

Four months after Harvey, opposing forces continue to stymie the delegation’s efforts. Most recently, the U.S. House passed an $81 billion relief bill that was to be split between Texas and other areas impacted by hurricanes and wildfires, only to see the Senate refuse to take it up before the chambers exited for the holidays.

The most central U.S. House player in this effort is Culberson, the Republican congressman from west Houston and a nine-term incumbent.

He is Houston’s only member of the U.S. House Appropriations Committee and has earned quiet praise from some Democrats for a willingness to work across party lines and with members from Florida who are also fighting for disaster funding after their own hurricane damage.

“He’s at the right place and the right time for Houston,” Cam Savage, Culberson’s political consultant, told The Texas Tribune. “His position is going to afford him to have a real impact on how this legislation is created, helping people get back on their feet.”

But Stein sees signs of danger for Culberson and other Republicans in the region if their efforts fall short.

“If they don’t get that $81 billion out, I think there are consequences for the November election,” Stein said, adding that voters are likely to focus on results rather than well-intended but unsuccessful efforts by members of Congress to provide Harvey relief.

“That raises an interesting question of whether or not there’s public support for these guys,” Stein said.

Savage argued that the politics will take care of itself if Culberson focuses on the policy.

“It’s more important that we do [pass the funding] first and tell the story later,” Savage said. “That’s certainly the way he approaches it … We really feel that that’s a call he has to answer, so it’s hard to focus on the politics in the wake of something like that, but ultimately, the election is going to come.”

In many ways, it’s already here.

Culberson coasted to re-election in 2016 last year, but Hillary Clinton also carried the district against Trump — a development that prompted Washington chatter that the Democratic party might invest millions into ousting Culberson.

No fewer than six Democrats are vying for the nomination, and Hurricane Harvey is on their minds as well. Alex Triantaphyllis, a nonprofit executive, is one of those contenders. He charges that Culberson did not do enough during his years on Appropriations to prevent the staggering damage in the first place.

“I want what’s best for the district and the broader Houston community, and in this case I hope we get the funding as soon as possible, and that’s the priority we all have,” Triantaphyllis said. “[But Culberson] has failed to use his position as an appropriator to make sure that the federal government is doing its part to build the infrastructure we need to mitigate the flood damage here in Houston.”

Texas’ 2nd Congressional District, currently represented by Poe, leans Republican and snakes from the heart of Houston out west and north into the suburbs. Constituents there felt first the full impact of the storm and then the aftermath of the Army Corps of Engineers’ decision to release water from the Addicks and Barker reservoirs to protect the dams.

As a result, flooding is the pervasive issue on the campaign trail in the race to succeed Poe, which has drawn nine Republicans and five Democrats.

Republican Kevin Roberts, a first-term state representative, is running in the crowded GOP primary. To differentiate himself, he is using his perch to speak with fluency about state and government bureaucracies on the issue of flooding.

“I’m going to be on FEMA’s doorstep everyday” if he wins his race, he told the Tribune. “We’re going to do checks on constituents in Congressional District 2, who are still waiting for them to act and to push the paperwork through.”

In the neighboring 29th Congressional District, there is another primary field packed with Democrats to replace Green. State Sen. Sylvia Garcia, who is running for the seat, told the Tribune that Harvey relief is a central peg in her stump speech. But she also sees it organically while campaigning.

“Seldom do you find a millennial that asks about something besides education and Dreamers and DACA,” she observed. But, this year, it’s different.

While block-walking in Houston recently, Garcia said a 20-something young man answered a door and said his biggest worry was whether there will be enough disaster aid farther down the coast in the Corpus Christi region.

Recent history suggests the political implications of a storm as damaging as Harvey are likely to outlast this election cycle — and even many of the region’s members of Congress.

When U.S. Sen. Mary Landrieu of Louisiana ran for re-election in 2014, she was already one of the last Democratic senators in the South and facing political headwinds. Certainly, the South was turning against the party and it was an all-around miserable year for her party. But one of the other reasons cited for her loss that year was how Hurricane Katrina in 2005 displaced voting blocs of African-Americans and complicated the Democrats’ ability to get out the vote in New Orleans.

Landrieu was able to win re-election in 2008, a far better year for Democrats overall. But all of these forces combined in 2014 to cost her Senate seat.

Similarly, in Houston, the aftermath of Harvey, including potentially new restrictions on rebuilding in certain areas, could move thousands of voters to different congressional districts.

Stein, the Rice professor, argues that the next round of redistricting and reapportionment in 2021 could further scramble longtime incumbents’ districts.

But he also suggests that this storm was so big and the damage so staggering that politicians won’t be able to offer voters pat answers for how to address the problems ahead for Houston.

“It’s not obvious what we should do,” he said.