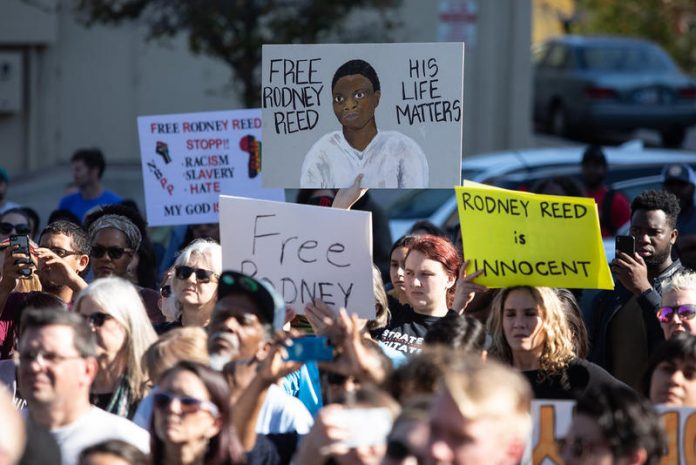 Roughly 1,000 people, including Reed’s mother Sandra Reed, showed up for the demonstration, according to Texas Observer reporters who were on the scene. Protesters carried flags bearing the words “innocent” and held signs while chanting “free Rodney Reed!”REAL LIFE. REAL NEWS. REAL VOICES.Help us tell more of the stories that matter from voices that too often remain unheard.Become a founding member

Despite calls from lawmakers, celebrities and activists for Reed’s case to be reexamined, Gov. Greg Abbott has stayed quiet on the matter.

“This case shows that everybody behind bars are not guilty. My son is innocent,” Sandra Reed said at the protest on Saturday. “I stand on these truths ― scientific facts and findings back me up.”

She added: “I heard Governor Abbott is a good man. Well, I say actions speak louder than words.”

Reed, who has served more than two decades in prison, is scheduled to be executed by lethal injection on Nov. 20. Abbott’s office did not immediately return HuffPost’s requests for comment.

Protesters marched on the streets of Austin near the governor’s mansion. Local city council members joined the demonstration, as did the mayor, Steve Adler. Shaun King, a prominent civil rights activist, also spoke at the event.

Reed’s case was thrust into the spotlight last month after celebrities, including Kim Kardashian West, Beyoncé and Meek Mill, began lobbying in his defense.

Reed, who is black, was convicted of sexual assault and murder in the 1996 death of 20-year-old Stacey Stites in Bastrop, Texas.

Investigators found DNA from Reed’s semen on Stites’ body, though Reed maintains that he and Stites, a white woman, were in a consensual sexual relationship. Reed, now 51, was 29 when Stites died.

According to the Innocence Project, which also serves as Reed’s legal representation, new evidence — including new witnesses who can corroborate Stites’ and Reeds’ relationship — can prove that Stites’ fiance Jimmy Fennell was responsible for her death.

“Today, I joined a diverse, bipartisan crowd urging Gov. Abbott to stop the execution of [Rodney Reed] and allow a full investigation of all evidence,” Adler tweeted from the event. “The people’s faith in our justice system demands it.”

Fennell was a police officer at the time of Stites’ murder and was initially a “prime suspect” in her case, according to the Innocence Project.

Fennell later pleaded guilty to kidnapping and sexually assaulting a woman he had in his custody in 2007. He served 10 years in prison.

In Reed’s commutation request, the Innocence Project introduced new witnesses who recalled Fennell expressing anger over Stites’ infidelity and referring to Reed as a racial slur.

Arthur Snow, who was incarcerated with Fennell, said that Fennell once told him that he had to “kill my nigger-loving fiancee,” according to the commutation request.

The document also cites a statement by Charles Wayne Fletcher, a former Bastrop sheriff’s officer, who recalled a time when Fennell told him he believed Stites was “fucking a nigger.”

Earlier this week, 42 Texas state senators and representatives from both parties sent matching letters to Abbott asking him to halt Reed’s execution and further investigate the new evidence in Reed’s case.

The letters were also sent to Texas Board of Pardons and Paroles chair David Gutiérrez.

“Killing Rodney Reed without certainty about his guilt may exacerbate that issue and erode public trust — not only in capital punishment, but in Texas justice itself,” the lawmakers wrote.