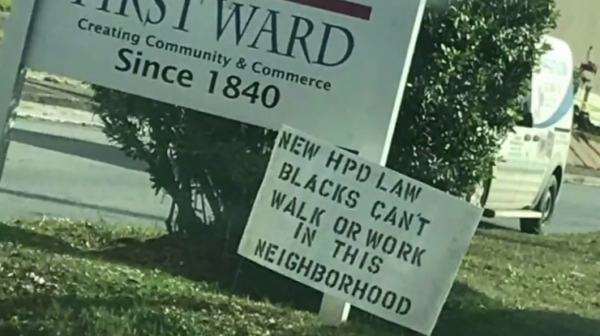 A Texas woman took matters into her own hands on Nov. 30 and ripped down an inflammatory sign planted in a public median near a Houston neighborhood.

Gloria Perez told ABC13 on Friday that she was on her way home when she saw a racist sign placed underneath the First Ward Welcome banner, in plain sight. The message was stenciled in capital letters and read, “New HPD law. Blacks can’t walk or work in this neighborhood.”

On the bottom of the sign, an obscene sexist remark was directed toward a female officer of the Houston Police Department. The news station didn’t reveal the female cop’s name.

“I don’t want anybody reading that,” Perez told the news station. “I thought it was really racist. No matter who it was towards. Both towards the Black community, people of color, and the Houston Police Department. It offends everybody.”

Perez said she took a picture of the controversial sign and asked social media for advice on what to do. She then jumped out of her vehicle, grabbed the item and threw it away in the trash.

“I decided to get it off the street. I didn’t want any child reading that period, and thinking their dreams could be restricted based off of a sign,” she added.

“Yahh , just look at this blatant s**t, racist nowadays have no shame in hiding,” a Twitter user wrote. “Funny how cops haven’t caught any one, sick of this! I so feel for our next generations.”

Another person tweeted, “Smdh, what would the world look like if racist bigots disappeared?

What century is this? #RacismisUgly”

Spokesman for the Houston Police Department, Victor Senties, said authorities were not aware of the sign, but were “looking into it.”