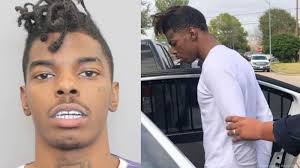 Henderson was taken into custody at what authorities believe may be his girlfriend’s home in the 4200 block of Heritage Trail.

Henderson appeared in court on Thursday night. He was led to the courtroom shackled in a set of Sullivan’s handcuffs.

Henderson spent about 20 minutes in court as the judge spoke about bond amounts on the murder charge as well as other charges. He’s facing at least three charges in Harris County and another in Galveston County.

“Mr. Henderson, in the murder case I’m setting your bond at $150,000. That’s taking into account that you have a felony bond pending that you forfeited which means you didn’t show up for court. Which is now set at zero and you have a new misdemeanor charge for assaulting a family member … out of Galveston County for attempted theft where the judge has set that bond at $20,000,” the judge said.