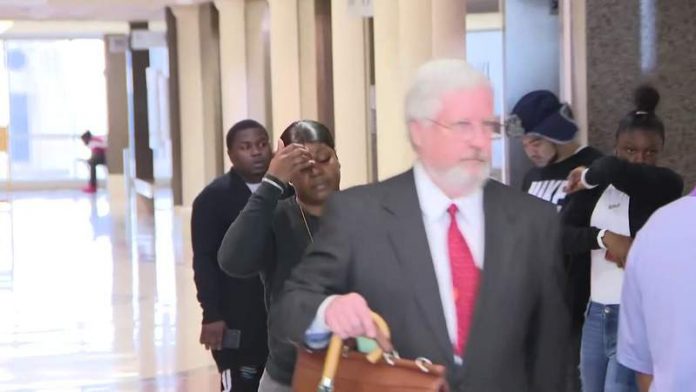 A woman and her boyfriend, accused of helping a suspect in Nassau Bay police Sgt. Kaila Sullivan’s death, were taken into custody Monday morning after a judge increased their bonds Monday morning.

Tiffany Henderson is the mother of 21-year-old Tavores Henderson, who faces a capital murder charge in Sullivan’s death. Tiffany and her boyfriend Geoffrey Wheeler, are accused of helping Tavores evade police for two days before being captured. The couple each face a felony charge of hindering the apprehension of a fugitive and appeared in court Monday.

Last week, Wheeler and Tiffany were each granted personal recognizance bonds and left custody. A judge revoked these bonds Monday, issued higher bonds and they were both taken into custody again.

A prosecutor with the Harris County District Attorney’s Office said Tiffany Henderson and Wheeler denied knowing Tavores and picked him up from the scene of the crime and dropped him off at a hotel in Houston. Prosecutors asked the judge to increase the bonds, taking into consideration the severity of their alleged crimes.

Wheeler was initially given a $10,000 personal recognizance bond and left custody. That bond was revoked Monday and his new bond was set at $50,000.

The judge said Tiffany Henderson was out on bond for another felony when she allegedly helped her son hide from police. Her initial $60,000 bond was revoked. Henderson must now post a $125,000 bond plus the $60,000 that is pending for elderly assault, bringing her total to $185,000 in order to get of jail.

Both Tiffany Henderson and Wheeler were taken into custody again Monday at court.

Wheeler was later released Monday night on the $50,000 bond.

“Had they (Tiffany Henderson and Wheeler) been forthcoming we would have Mr. Henderson in custody that night,” said Harris County prosecutor, Sean Teare, “there wouldn’t have been hundreds of man-hours, the danger to the entire community before we finally apprehended him two days later. So that’s why they’re both charged.”

Teare said anyone else who helped Tavores hide from police will face similar charges.