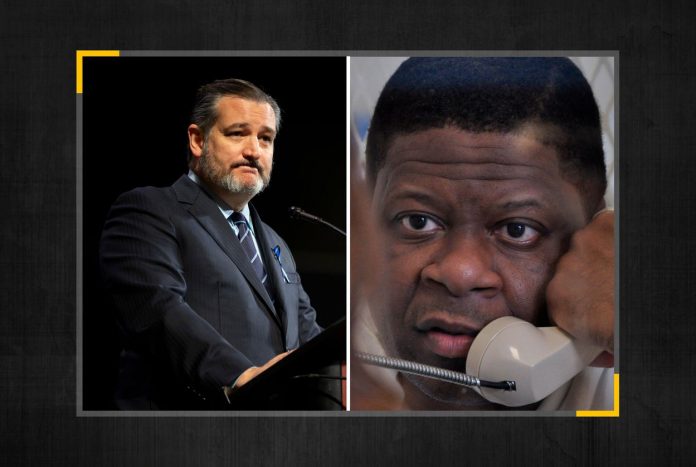 Republican U.S. Sen. Ted Cruz has joined the fast-growing calls from Texas lawmakers and A-list celebrities to take a closer look at the death sentence of Rodney Reed.

Cruz called efforts to halt the execution of Reed “a remarkable bipartisan coalition” on Friday night, the day before hundreds of people rallied outside the Texas Governor’s Mansion in support of Reed.

“Having spent years in law enforcement, I believe capital punishment can be justice for the very worst murderers,” Cruz tweeted. “But if there is credible evidence there’s a real chance a defendant is innocent, that evidence should be weighed carefully.”

Reed is set for execution on Nov. 20 and has been on death row for more than two decades. His guilt has always been shrouded in doubt, but the attention and calls for Republican Gov. Greg Abbott and the Texas Board of Pardons and Paroles to stop his death has skyrocketed in recent months.

This week, a bipartisan group of 26 Texas House lawmakers sent a letter to Abbott and the parole board asking them to stop Reed’s execution so new evidence can be reviewed. Sixteen state senators penned a similar letter Friday, prompting Cruz’s response.

At Saturday’s rally outside the Governor’s Mansion, dozens of politicians, activists and former death row inmates joined family and other supporters of Rodney Reed to demand a reprieve. “Yes we want a delay, but that’s not our ultimate goal,” national Black Lives Matter activist Shaun King said. “Our ultimate goal is not just to extend his life by 30 days.”

A spokesman for Abbott did not immediately respond to questions on Cruz’s statement. And the governor’s office has not responded to previous questions on the Reed case.

The murder of 19-year-old Stacey Stites in Bastrop and the subsequent conviction of Rodney Reed has been in the spotlight for more than two decades. Reed, now 51, has consistently maintained his innocence in the 1996 slaying. His lawyers for years have pointed to new evidence they say makes it impossible for Reed to be the killer and instead, they say, puts suspicion on Stites’ fiancé, Jimmy Fennell.

Both men have been accused of multiple sexual assaults. Reed was indicted, but never convicted, in several other rape cases months before his trial in Stites’ death began in 1998. Fennell spent 10 years in prison after he kidnapped and allegedly raped a woman while on duty as a police officer in 2007.

Since Reed’s conviction in Stites’ death, a suspected murder weapon has gone untested for DNA, forensic evidence has been reexamined and new witnesses have come forward. That has led to a growing chorus of voices — including celebrities like Dr. Phil, Kim Kardashian West, Beyoncé and Oprah — to express their belief in Reed’s innocence and plead for Abbott to stop his death.

Reed has appeals pending in federal court on new witnesses and a repeated request to test DNA on the suspected murder weapon, but most attention is directed at Abbott’s role. The Texas governor can delay an execution for 30 days on his own. With a recommendation from the parole board, he may grant a longer reprieve or re-sentence a death row inmate to life in prison.