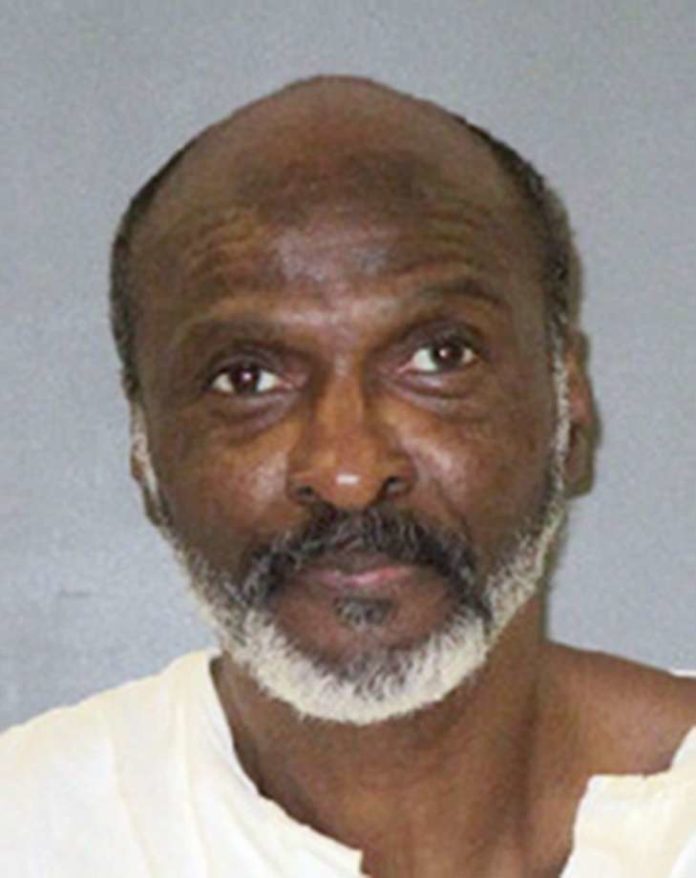 A Dallas man who was already on parole for the murder of his estranged wife when he stabbed and strangled his ex-girlfriend in 1999 begged for forgiveness and thanked God with his final breaths before his Tuesday night execution.

“I’ve asked God to forgive me. Please find it in your hearts to forgive me,” William Earl Rayford said before he died by lethal injection at 8:48 p.m.

The 64-year-old asked his victim’s family for forgiveness and promised to keep them in his prayers, according to a Texas Department of Criminal Justice spokesman.

“By no means am I happy for what I’ve done. I have asked the Lord to forgive me,” he said. “Tell my kids I’m sorry for being a disappointment. Thank you. God bless. I’m ready warden.”

The execution, which took 13 minutes to carry out, was delayed more than two hours in light of a pair of pending Supreme Court appeals, including claims that racially biased testimony tainted his sentencing.

With another execution on the calendar for Thursday, this week could be the first time in five years the Lone Star State has seen back-to-back executions so close together. The next death date on the calendar is for John David Battaglia, who was convicted of killing his two daughters in 2001 while narrating the slayings to his estranged wife on the other end of the phone.

The scheduled execution comes two weeks after Texas carried out the nation’s first execution of 2018 with the lethal injection of Houston-area serial killer Anthony Shore.

Rayford was first sent to death row 17 years ago, following the gruesome slaying of Carol Hall. The crime eerily echoed a 1986 killing that netted him a 23-year prison sentence.

In the earlier killing, the former glass cutter had stabbed his ex-wife Gail Rayford 16 times, just after she won a temporary restraining order against him. Their four children were at home and witnessed the killing – then watched the Dallas man leap out a second-story window, according to court records.

Rayford spent eight years behind bars for the crime, but was released early on mandatory supervision under a law that has since changed.

But in 1999, history would repeat itself.

Her body was later found in a culvert. She’d been strangled, beaten and stabbed.

In the years since his arrival on death row, Rayford, who is black, has launched appeals centering on claims of bad lawyering, brain damage and a suicide attempt that his lawyers argued showed remorse and hinted that he may not be a future danger.

This week, in a flurry of last-minute filings in the Supreme Court – including one late Tuesday – Rayford’s lawyers argued that racially charged testimony during the punishment phase of trial “irreparably stained” the case.

“The punishment phase of Mr. Rayford’s trial was tainted when defense counsel made the egregious and prejudicial error of soliciting testimony – later determined to be false – linking race to future dangerousness,” his lawyers wrote. “William Earl Rayford is on the brink of being executed, at least in part based on his race.”

Defense counsel also argued that Rayford had been wrongly denied funding to hire experts in his case.

But late Tuesday – after the execution had been delayed for more than two hours – the court rejected both of Rayford’s bids for reprieve.

Meanwhile, with two days to go till the next date, Battaglia’s lawyers are arguing for a reprieve based on questions of competency and mental illness. Three out of four experts who evaluated the Dallas man said he suffers delusions that render him incompetent to be executed, according to Supreme Court filings. The fourth, his lawyers wrote, used the wrong standard to determine his level of competency.

The former accountant has been on death row since the early 2000s, when he was convicted of killing his daughters, 9-year-old Mary Faith and 6-year-old Liberty.

At the time, Battaglia was already on probation for beating his estranged wife, Mary Jean Pearl.

But when Pearl complained of continued bad behavior – which could have sparked a probation revocation – Battaglia retaliated by killing his daughters during a scheduled visit.
Pearl listened on the phone as her girls pleaded for their lives, and tried running.

“Merry f****ng Christmas,” her ex shouted as he fired the fatal shots.

Afterward, he drove to a tattoo parlor before he was arrested.

Last year, Texas led the nation in executions with seven condemned men put to death. The Lone Star State is the only state to execute a prisoner so far this year. Rayford’s execution was the second nationwide this year.