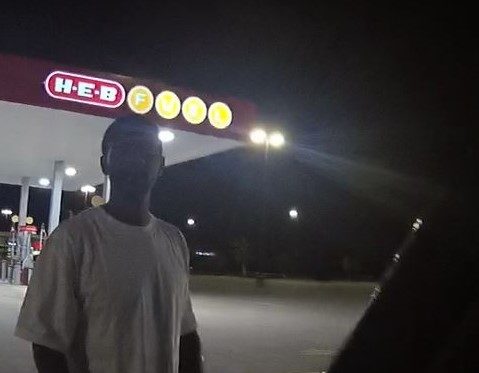 A Black man says he was beaten into submission when questions about why police were searching his car led to his arrest.

Officers were called to a parking lot in the 6400 block of Garth Road in the Houston suburb of Baytown to investigate a suspicious car at about 11:50 p.m. on July 6, according to a Baytown police incident summary.

As the officers approached the car, the driver, whom police identified as Crawford, immediately got out of the car. He gave police his name and date of birth and gave officers permission to search his car, police say in the summary.

In the video, Crawford can be heard asking officers what’s going on when they continued the search even after one of the officers admitted they hadn’t found anything and there was no warrant for Crawford’s arrest.

“I’ve got insurance and everything,” Crawford said. “What’s going on?”

“OK and what does that have to do with anything,” one of the officers responded in a back-and-forth that quickly became volatile.

“So when am I free to go?” Crawford asked the officer.

“Whenever, man,” the officer responded.

But when Crawford took a step toward the driver’s seat of his car, the officer said, “All right, put your hands behind your back. Hands up, dude. I will freaking drop you.”

Crawford can be heard repeatedly asking, “what’s going on?” as a scuffle blurs the video footage.

“Put your hands behind your back,” the officer can be heard saying. “I’m going to taze you.”

Seconds later, Crawford screams repeatedly through multiple Taser shocks. One officer was holding him down and another used the Taser on him.

Police say initially officers were only able to get one of Crawford’s hands in handcuffs and that arresting him took about four minutes because he was resisting and failing to comply with orders.

“Due to Mr. Crawford’s persistent resistance, and the fact that the Taser failed to momentarily incapacitate Mr. Crawford, one of the officers delivered a series of elbow strikes and a closed fist strikes to Mr. Crawford’s head area in an attempt to disorient him so they could get him into custody,” a police official says in the incident summary.

The officers on the scene called to get help from other officers, and when they arrived, the officers were able to take Crawford into custody, police say in the incident summary.

After the incident, Crawford showed ABC 13 a gash on his face, scrapes and severe bruising he suffered in what he describes as excessive force.

“They don’t have an excuse to beat a man into submission, period,” Crawford told the television station. “I didn’t have a weapon.”

Baytown police officials say in the incident summary that officers decided to arrest Crawford when one of them found several pills that appeared to be packaged to sell in pieces of plastic, but Crawford told ABC 13 the pills were antibiotics he was prescribed for a spider bite.

Crawford, who was not charged with a drug crime, was charged with assault on a public servant after police told ABC 13 Crawford scratched one of them.

After the incident, Crawford was taken to Ben Taub Hospital, where he was treated for facial injuries. He was later booked into the Baytown jail, police say in the incident summary.

The officers have returned to work for normal duty while Baytown police say an internal review is underway.

Police say Crawford has not filed a formal complaint.