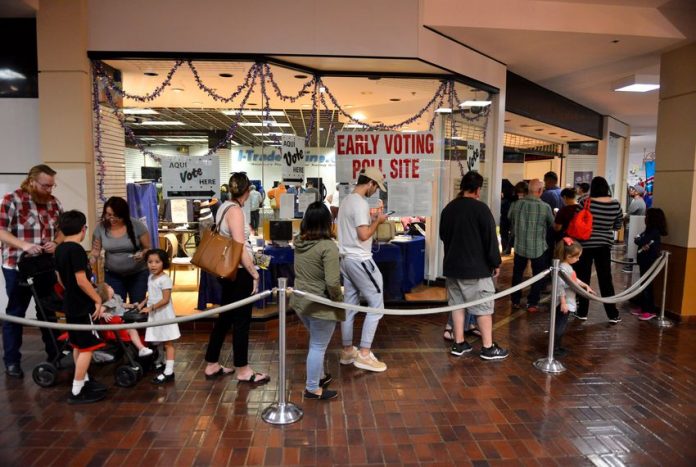 Worried about the suppression of young voters in 2020, national and Texas Democrats are suing the state over a newly implemented election measure that’s triggered the shuttering of early voting places, including on college campuses, in various parts of the state.

In a federal lawsuit filed Wednesday in Austin, the Texas Democratic Party — joined by the Democratic campaign arms for the U.S. House and Senate — alleges that the state’s move to effectively end the use of what were known as temporary or mobile early voting sites is unconstitutional because it discriminates against young voters by shrinking their access to the ballot box.

Republican lawmakers pushed the law, introduced during the last legislative session as House Bill 1888, to curb what they saw as abuse in school bond elections by requiring voting sites to remain open for all 12 days of early voting. Despite warnings from local election officials, HB 1888 was crafted broadly enough to outlaw the long-established practice of moving polling places during the early voting period to reach as many voters as possible near where they live, work or go to school.

As a result, both young and rural voters are losing access to early voting sites that were legitimately used to offer a day or two of early voting to places in places where it wasn’t practical or cost-efficient to maintain a site open for all of early voting.

“HB 1888 now mandates that, based on where they live, some voters will enjoy the same consistent access to early voting they had previously, but voters who live near now defunct temporary voting sites, especially young voters, will suffer reduced or eliminated access to the franchise,” the Democrats claimed in the lawsuit.

Citing violations of the First, 14th and 26th Amendments, the Democrats are asking a federal judge to block the state from implementing HB 1888.

The use of temporary early voting sites dates back more than a decade in some parts of the state. Counties used them to reach smaller, more rural communities or to bring early voting to various college campuses within a county. Others relied on mobile voting sites to provide a window of early voting at hospitals or government buildings that couldn’t host a permanent site or at senior living facilities where residents face increased mobility issues.

Focusing on young voters in their complaint, the Democrats allege the change in law “disproportionately reduces or eliminates” access for the tens of thousands of Texas voters who relied on on-campus early voting locations and “discriminatorily limits equal access to early voting” for young voters.

Ahead of the the state’s Nov. 5 constitutional election, the new law has prompted closures of temporary voting sites in both urban and rural communities and on several college campuses. And some officials are already warning of closures for the upcoming 2020 elections, which are expected to pack polling places like never before, because of the law.

The attorney general’s office, which represents the state in court, did not immediately respond to a request for comment. Neither did a spokesperson for the secretary of state’s office, the lead defendant in the lawsuit.

During the legislative session, a lawyer with the secretary of state’s office told lawmakers that the measure would “limit substantially” the use of temporary voting sites that were being used for legitimate purposes.

State Rep. Greg Bonnen, who authored HB 1888, also did not immediately respond to a request for comment. The Friendswood Republican has previously defended the measure by emphasizing that counties didn’t necessarily have to close temporary polling places; they just needed to keep them open for the entire early voting period.

(Some county officials have said they can’t afford the hefty price tag to make temporary sites permanent. Others said they wouldn’t have enough election workers, voting machines or suitable building space to do that for all 12 days of early voting.)

In pushing HB 1888, Bonnen cited a “selective harvesting of targeted voters” in school bond elections as justification to get rid of temporary polling places. But in their complaint, the Democrats chided Republican lawmakers for rejecting amendments to the measure that would have carved out college campuses, which proponents of the law never cited as venues for such targeting of voters.

“In direct contravention of the Twenty-Sixth Amendment, Texas enacted HB 1888 with the intent and effect of preventing newly-enfranchised young Texans from effectively exercising their right to vote,” the Democrats alleged.