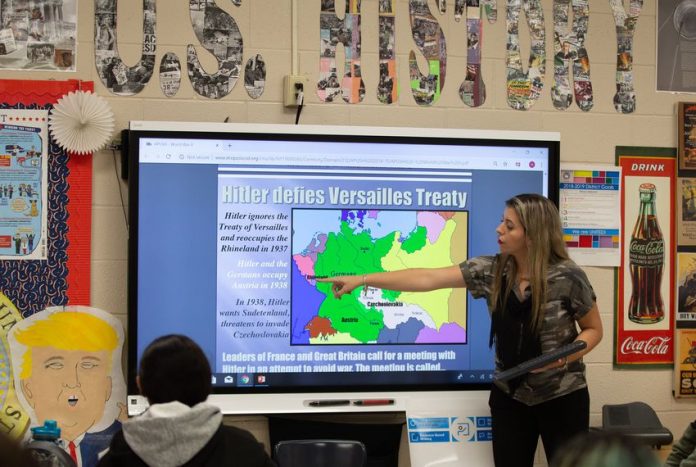 Approaching the podium, Dallas middle school teacher Ron Francis faced the circle of 15 large, wooden desks at the Texas State Board of Education’s September meeting. The board was discussing changes to the social studies curriculum standards, the result of a 10-month-long process to cut back on what teachers have to cover in the classroom.

But Francis, a 6-foot-tall Army veteran who teaches in Highland Park ISD, was more concerned about what the board wasn’t cutting. The standards currently list slavery alongside three other causes for Texas’ involvement in the Civil War, which he said downplays its historical role.

“Get rid of tariffs, states’ rights and sectionalism,” Francis told the board bluntly. “Thank you.”

This week, the board will vote on final changes to curriculum standards, which proponents say provide teachers with clarity. But they’re still historically inaccurate, according to Francis and other critics. The updated standards still include states’ rights and sectionalism, now relegated to “contributing factors” in Texas’ participation in the Civil War, while slavery has been elevated to a “central role.”

That’s not good enough for Francis. “The lies they’re telling are a little smaller than the lies they used to tell,” he said.

But not all Texas teachers choose to step into the fray around the board’s process, which for more than a decade has been characterized by fierce political battles among the board’s liberal, moderate Republican and social conservative factions, each vying to determine what children should be learning. Instead of leaning into the “culture wars,” many teachers said they lie low and wait for the next set of standards, since they have some wiggle room on how they teach those lessons in the classroom.

“I’m not supposed to teach reconstruction,” said Marcy Emerick, who teaches 11th grade U.S. History at Akins High School in Austin ISD. “But we spend a day on it.” This year, Emerick said she made a present-day connection to the institutionalized racism of the Civil War’s aftermath by showing a video of last May’s white supremacist rally in Charlottesville and discussing the removal of Confederate monuments.

But sometimes she can’t teach all the historical lessons she feels are necessary, because of the demands of preparing students for standardized tests. Reviewing the board’s current proposal for cutting back the standards, she looked at a line that struck the mention of immigrant contributions.

Still, many teachers are grateful for the streamlining efforts, however minimal the changes might be. At United ISD in Laredo, high school teacher Gaby Mondragon looked over the proposed changes to the standards. “This does help me,” she said. When she noticed a strikethrough over Clarence Darrow, an attorney in the 1925 Scopes Trial, she paused. “That makes sense,” she said. While teaching the trial last year, she’d decided not to stress the names of the lawyers – “and then it was on the exam.”

Reminders of the State of Texas Assessments of Academic Readiness, or STAAR test, are woven throughout Mondragon’s lessons. In a lesson on World War II this fall, she paused after mentioning the Munich Conference, starring it on her smart board. “Star,” she told her students, “because it might come on the STAAR.” Students in eighth and 11th grades take the social studies STAAR test.

But for teachers who teach a grade with no STAAR test, interpretation of the standards can be slightly less rigid. Francis, whose seventh-graders don’t take the state standardized test, says he requires his students to search for evidence in primary source documents to support reasons other than slavery for Texas’ involvement in the Civil War. “As we do that, it becomes pretty clear that slavery was the cause of the Civil War,” Francis told the board in September. “You can’t find evidence to prove that anything else was.”

Like most social studies teachers, Francis works to keep his personal politics out of the classroom. “I don’t share my political leanings with the children because that would be inappropriate,” said Francis. “I specifically tell the children that history is a search for the truth and it isn’t political. History can’t be conservative or liberal, the truth just is.” His head-on approach to controversy, though, is relatively uncommon.

Julie Woodard, a sixth-grade teacher in Rockwall ISD, sometimes avoids looking at her students when she knows she’s covering a sensitive subject. “I will have times when I just look at the clock,” said Woodard. “I say, ‘folks, we have different opinions in the room and I’m going to share this and this information.’”

Woodard doesn’t share any of her own politics with the kids. “I mean, they know that caramel apples are my favorite food group and they know that my grandkids are the cutest on the planet,” she said, “but when it comes to something of a sensitive nature, that’s not when you share your personal opinion.”

For Mondragon, teaching along the border, there’s a reticence to bringing up politics explicitly – though evidence of the political nature of her subject is sprinkled throughout her classroom décor. On one wall, she has a poster that reads, “We did not cross the border, the border crossed us,” a rallying cry of immigrants’ rights activists. And notably missing from the long line of presidential portraits is the 45th – instead, a painted caricature of President Trump leaned against the wall at the front of the room.

But Mondragon’s students said they want more guidance from their teachers about how to talk about politics. “It’s really difficult with all these political parties,” said Laura Delgado, a junior in Mondragon’s AP U.S. History class. “We always believe what social media says.”

“It’s really messy,” said junior Rebecca Gomez. “I want to know about it and I want to tell my mom about it.”

They want a class specifically on civic engagement – something that would help them to feel more confident about how to vote when they come of age next year.

Emerick’s students in Austin were confident about their political knowledge, and skeptical about what they learned in elementary and middle school social studies classes. “I just know they leave stuff out to make America look good,” said Eli Gutierrez, 17. “Like Columbus.”

“We just don’t learn the true stuff about what happened in our country,” said Sophia Romane, a blue-haired junior in Emerick’s class. Recalling lessons that her eighth grade Texas history teacher had given, she said, “We killed a lot of people to get this land. Very not OK.”

But not every student had the same memory of their Texas history courses. Ty Denton, 16, said that the way the Civil War was taught in his middle school – the same as Romane’s – was “from a very one-sided perspective.”

“I personally don’t think it was taught very well,” said Denton. His teacher portrayed the South as “very bad and racist,” he said. “It’s not fair to look at the Southern ideal as bad.”

Her perspective aligns with where the board appears to be going on its Civil War standards. “Is slavery a huge part of the Civil War? Absolutely,” said Deal. “Does that mean states’ rights or sectionalism didn’t play a part? Of course not.”

And that’s the narrative that could prevail when the board meets this week from Tuesday through Friday. Recommendations that were made in work groups and accepted during the September meeting are up for a public hearing, discussion and a final vote.

“I think we were able to make big improvements,” said Jennifer Hamzy, a high school teacher in Northwest ISD who served on two of the board’s social studies streamlining work groups this year. “No one is every going to agree with everything.”

If the board votes to pass the new standards as expected, they’ll go into effect next school year.

And that means that Francis will likely keep up his fight against the standards that, he argues, “misrepresent the causes of the Civil War” and “minimize racial oppression in the U.S.”