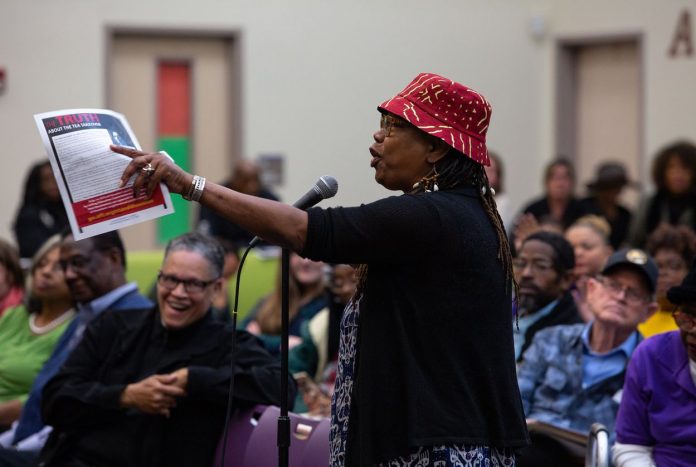 Parents and residents of the state’s largest school district filled a meeting at Wheatley High School Thursday evening to give state education officials a message: They would prefer their elected school board over one chosen by the state.

Texas Education Commissioner Mike Morath last week announced he plans to take over the 200,000-student Houston Independent School District and appoint a board of managers to run its schools. Lining up at the Texas Education Agency’s second community meeting since then, people voiced concerns about losing local control of their schools and not having a mechanism to hold new district leaders accountable.

Morath’s decision, which could be finalized within the next few months, came as a result of Wheatley’s repeated low performance in state ratings and the school board’s alleged malfeasance, detailed in a recent state investigation report.

AJ Crabill, Morath’s special advisor, stood alone at the front of the room Thursday fielding the barrage of questions. He asked for input about how the state should select members of the board and how it should hold them accountable, promising to incorporate local feedback as he developed the process.

But several made clear they didn’t want an appointed school board at all, arguing it would disenfranchise voters in the majority black and Hispanic district.

“We need to manage our own house and we don’t need you to put in place an unelected, unremovable board,” said Pamela Boveland, an education advocate whose daughter graduated from Houston ISD in 2003.

She urged the state to give new school board members voted in during last week’s election a chance to run the district.

Some said they didn’t trust Morath to appoint qualified people who shared their values — or to remove those who proved to be doing a bad job — and questioned why he hadn’t shown up to take questions in person. They wanted Crabill to know that state involvement in their district was likely to destabilize schools even further by decreasing enrollment and increasing teacher turnover.

“It’s discouraging to see what’s going on,” said Tori Presley, whose daughter is a senior at Wheatley High School. Presley lamented how often her daughter sees the news about the school’s low ratings plastered on social media and blasted on television.

“The state coming in and taking over our community? Man, that’s the worst thing you can do,” she told The Texas Tribune.

Martin Almazan, a Houston ISD resident, was the only person to say he thought an appointed board might help improve education, garnering jeers and angry headshakes from the audience. “What is the alternative?” he said. “We did this to ourselves.”

Crabill regularly pointed to state law when responding to questions about why the takeover was happening, despite the district’s overall B rating and list of high-performing schools. Lawmakers decided in 2015 to require state education officials to take harsh action after a school had failed for more than four years, either shutting that school down or appointing a board to run the entire district. Morath chose the latter instead of closing Wheatley High School.

The state has replaced the school boards for a few smaller districts in the last few years, for financial mismanagement, school board dysfunction and low academic performance. An appointed board of managers would likely run the Houstondistrict for two to five years, before Morath transitions power back to elected officials.

Houston ISD is currently suing the state to prevent a takeover, arguing that it would disenfranchise black and Hispanic voters.