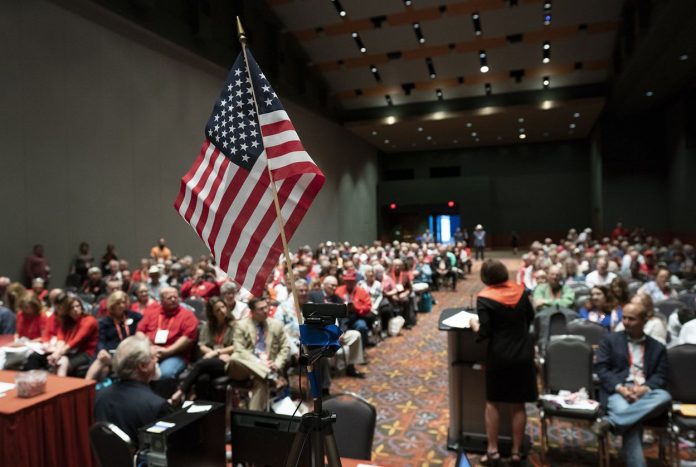 Texas Republicans may love Donald Trump, but they are still working out their differences with one another.

That was evident during here at the state GOP’s convention, a three-day marathon of presidential bear-hugging and flashes of intraparty resentments ahead of a November election where nearly every statewide official —as well as U.S. Sen. Ted Cruz — is on the ballot again. The biennial gathering, which brought close to 10,000 delegates to the Henry B. Gonzalez Convention Center, was headlined by a race for chairman that culminated in a long, bitter battle on the floor Friday afternoon.

At one point in the stormy session, delegate Terry Holcomb appeared to give voice to the mounting frustrations that Cindy Asche, who was challenging Chairman James Dickey, and her supporters were damaging the party by forging forward despite the numbers being clearly stacked against them.

“This sounds like something Hillary Clinton would do,” Holcomb said, earning loud cheers. “We hear speech after speech about unity, and here we are doing the most divisive thing possible. We’re gonna burn down the party so she can be queen of the ashes.”

The convention’s final day of speeches Saturday was highlighted by Cruz, no stranger to intraparty warring. But he referenced the chair race — as well as the March primaries — while pleading with Republicans to set aside their differences for November.

Texas Republicans at least found common ground in their embrace of the president — a less unifying figure at the last convention, which came days after Cruz ended his bruising battle against Trump for the 2016 GOP presidential nomination. The 2018 gathering, by contrast, was overflowing with odes to the president.

“Is he awesome or what?” Lt. Gov. Dan Patrick asked delegates Friday in his speech, which he briefly paused to record a video for Trump of the crowd wishing him a happy belated birthday. Patrick, who chaired Trump’s campaign in Texas after Cruz withdrew, also used his speech to hail Trump as the Babe Ruth of presidents, “knocking it out of the park every single day.”

“Two years ago, as your Victory chair, I was proud to endorse Donald Trump for president, and today I’m proud to endorse his first year and a half in office,” added Land Commissioner George P. Bush, who remains the most openly pro-Trump member of his famous political family.

Virtually any elected official who has been praised on camera by Trump showed it off in videos that played before they spoke. That included U.S. Sen. John Cornyn, R-Texas, who presented delegates with an updated version of his infamous “Big John” ad from 2008 that played up his closeness to “Big Don.”

And while Cruz kept his speech focused on GOP accomplishments under Trump more than the man himself, he nonetheless put the stakes of his own re-election bid in a dire context for presidential diehards. If Democrats take back Congress, Cruz warned, the day Nancy Pelosi is sworn in as House speaker “is the day impeachment proceedings begin.”

Loyalty to the president factored prominently into the chair race between Asche and Dickey, who had been a leader in Texas of the “Free the Delegates” effort to deny Trump the nomination at the 2016 national convention. Asche argued that was an impediment to growing the party to include the new voters that Trump turned out in 2016.

Yet Asche came up short in the race, losing to Dickey 35 percent to 65 percent Friday on the floor after a protracted battle that the party likely will not be able to swiftly put behind itself. In her final speech to delegates, Asche revealed that the party’s longtime accounting staffer had just resigned because, in Asche’s telling, she could not trust Dickey.

It was not just the chair race where lingering intraparty resentments were on display. In at least a couple of appearances at the convention, Patrick declared victory on the “bathroom bill” that he championed last year. He argued that while the measure didn’t pass through the Legislature, an overwhelming majority of GOP primary voters voted for a ballot item asking if they supported protecting the privacy of women and children when they go to the bathroom.

“If ‘victory’ on the bathroom bill means that it’s not coming back and there will be more focus on fixing school finance and promoting private-sector growth, that’s great news,” the San Antonio lawmaker said in a statement.

Despite the discord between the two legislative leaders, Patrick insisted in his speech Friday that the results of the March primary ballot propositions — they all netted large majorities of support — showed “there is no civil war in our party — there are just a few Republicans that haven’t gotten the message that it’s over.”

The intraparty tensions also flared around another statewide official: Bush. He weathered a few rounds of boos during his remarks Friday — apparently from delegates still upset with his management of the Alamo, a key issue in the four-way primary he won this year. “Remember the Alamo!” some of his critics yelled.

Then there was the debate over censuring Republicans in office, which began this year when the State Republican Executive Committee censured Straus.

That debate intensified this week at committee hearings during the convention. Members considered proposals censuring retiring state Rep. Byron Cook of Corsicana, a top Straus ally. They also weighed similar action against several members of the state’s congressional delegation, including Cornyn, over their support for omnibus spending legislation this year. Members handily rejected resolutions against the delegation members, though the censure of Cook was approved by delegates on Saturday.

Texas Democrats, who are staging their own convention next weekend in Fort Worth, relished the infighting at the rival party’s gathering, sending reporters daily recaps of the drama.

“The divisions in the Republican Party are clear,” the state Democratic Party chairman, Gilberto Hinojosa, said in a statement Friday. “While the Republican Party tries to figure out where it stands and where it’s heading, Texas Democrats are united, organized and ready to deliver on the issues that matter most to Texans.”