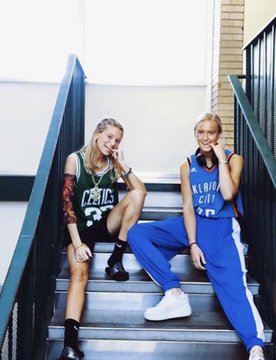 A social media post from a student at Houston-area Memorial High School went viral late Tuesday after the school held one of its annual themed dress days to celebrate the end of the school year.

It was supposed to be “jersey day” on the campus but instead some students took it a step further, adding fake tattoos, cornrows, baggy shorts, fake grills and more.

One student called out the apparent racism displayed by her classmates online.

It’s not the first time she pointed out racist attire by some Memorial students, posting an image dating back to 2015 where a student wore cornrows, a chain and had a handcuff around her wrist.

Spring Branch ISD released a statement regarding the issue saying that “jersey day” was approved but that some students made inappropriate additions to the dress-up theme.

“Memorial High School has a longstanding tradition for its rising juniors to have special dress days during the week before finals to celebrate the fact that this student class will soon be seniors,” according to the statement. “…On Tuesday, some rising juniors wore inappropriate dress and body/hair decorations as part of an alternative, unapproved response to the theme day. As a shared expectation about the theme was clearly violated, MHS has cancelled all remaining dress theme days for the remainder of this week.”

“While the majority of rising juniors followed the approved dress theme on Tuesday, any instance of an inappropriate or offensive dress violation will not be tolerated. Students found to be in violation of the Student Code of Conduct and dress code will be given a consequence. MHS is focused today on preparing all students for finals and ending the school year well.”

Others posted about the apparent racism, commenting how black people are usually denied jobs, internships and more at their schools over the basic “dress code.”