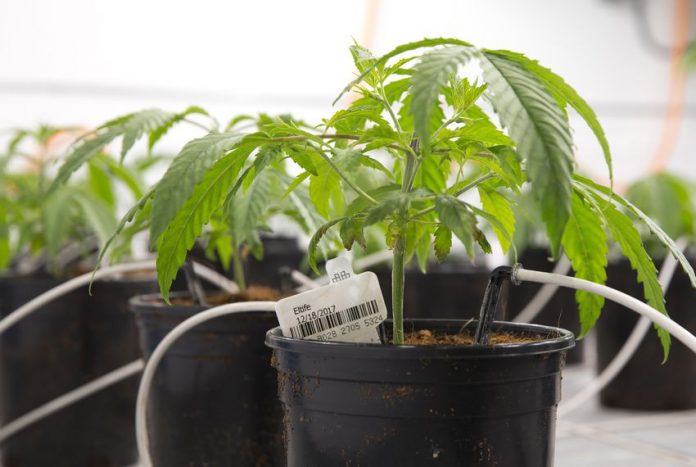 After a brief discussion, the Texas House gave preliminary approval Monday to a bill that would reduce the penalties for low-level possession of marijuana — a move lauded as a win by those eager for the state to take its first major step toward loosening its staunch marijuana laws.

But hopes of turning the bill into law remain slim. After the House grants final approval for the bill — usually just a formality — it will head to the Senate, where presiding officer Lt. Gov. Dan Patrick has expressed opposition to the idea of loosening marijuana possession penalties.

The lower chamber voted 98-43 in favor of House Bill 63 by state Rep. Joe Moody, D-El Paso, after he changed it on the chamber floor from a decriminalization measure to one that reduces the penalties for possession. The bill lowers possession of 1 ounce or less from a Class B to a Class C misdemeanor, which is the same classification as a traffic ticket.

After state Rep. Jonathan Stickland, R-Bedford, who applauded Moody for spearheading the bill, asked the Democrat why his measure had been “watered down,” Moody said he did so in the hopes of getting it to the governor’s desk.

“I’m not going to sacrifice the good for the perfect. If this is what we can do, then this is what we must do,” Moody said. “We can’t keep hauling 75,000 Texans to jail every year.”

Those found to possess 2 ounces or less or marijuana but more than 1 ounce would be charged with a Class B misdemeanor — punishable by a fine of up to $2,000, jail time or both.

“When I first proposed changing our criminal penalty for personal use of marijuana to a civil penalty, there was some support and even more caution,” Moody told other representatives.

The revised version of HB 63 would make it so Texans caught with 1 ounce or less of marijuana can’t be arrested. Instead, judges would automatically put those offenders on deferred adjudication probation. If an offender successfully completes the terms of his or her probation and does not commit more than one offense in a calendar year, his or her record would be expunged, Moody said Monday. The bill would also ensure that Texans possessing 1 ounce or less of marijuana will not have their driver’s licenses suspended.

Ten states and the District of Columbia have legalized small amounts of marijuana for personal use. Thirteen other states have made possessing small amounts a civil offense rather than a criminal infraction, according to the National Conference of State Legislatures. In Texas, possession of any amount of marijuana is illegal, but some district attorneys in larger Texas counties, including Dallas and Harris, have already pledged not to prosecute first-time, low-level offenders.

Moody has tried in the past several sessions to get this legislation to the governor’s desk, but to no avail. The House vote Monday marks significant progress for Moody; it’s the first time the lower chamber approved such a measure. But the opposition of the lieutenant governor remains a major hurdle.

In a previous statement to The Texas Tribune, Patrick spokesperson Alejandro Garcia said the lieutenant governor is “strongly opposed to weakening any laws against marijuana [and] remains wary of the various medicinal use proposals that could become a vehicle for expanding access to this drug.”

Reached by email Wednesday afternoon, Sherry Sylvester, a senior adviser to Patrick, confirmed that Patrick’s position had not changed. Moody’s companion bill in the Senate, authored by state Sen. José Rodríguez, D-El Paso, has yet to go before a committee.

Law enforcement officials, too, have raised alarm bells on Moody’s bill. Many are wary that relaxing the state’s marijuana laws by any means would eventually lead to the state legalizing the drug for recreational use.

Moody disputed that claim on the House floor.

“There are some people who have drawn a line in the sand and refuse to take any step forward whatsoever on reform,” he said. “They say it’s a full-on slippery slope to full-on legalization. The [bill] in front of you is not legalization. It’s not even decriminalization.

“We can’t legislate in fear of what some future legislators might do. We’re here to solve the problems of today. It’s not about whether marijuana is good or bad; it’s about whether what we’re doing on enforcement right now is good policy, and we all know it’s not.”

As originally proposed by Moody, HB 63 would’ve replaced the criminal penalties for people caught with an ounce or less of marijuana and replaced it with a civil fine of up to $250. Only those fined more than three times would face misdemeanor criminal charges.

When laying out his original bill to a House committee earlier this year, Moody said his bill would save the state money since counties wouldn’t have to allocate resources toward prosecuting Texans found to possess small amounts of the drug.

Debate on the House floor was relatively tame. A handful of lawmakers lauded Moody for authoring the bill, but state Rep. Cecil Bell, R-Magnolia, said that any lawmaker who voted in favor of it was “voting to legalize marijuana.”

Bell was met with yells of “no” from other lawmakers on the House floor.

Decriminalizing marijuana or lessening the criminal penalties for Texans found with small amounts the drug has broad bipartisan support. In its most recent platform, the Republican Party of Texas approved a plank for the first time in support of making it a civil, rather than a criminal, offense to possess an ounce or less of marijuana.

During a gubernatorial debate in September, Gov. Greg Abbott wouldn’t go that far — but he opened the door to reducing the penalty for low-level possession from a Class B to a Class C misdemeanor.

Other bills at the Capitol aimed at reducing the criminal penalties for Texans found with small amounts of marijuana include similar measures by Democratic state Reps. Gene Wu and Harold Dutton — both of whom represent the Houston area. Dutton’s bill was voted out of a House committee but has not yet reached the House floor for a full debate.

Despite the last-minute changes to Moody’s bill, marijuana advocates largely applauded its passage from the lower chamber Thursday.