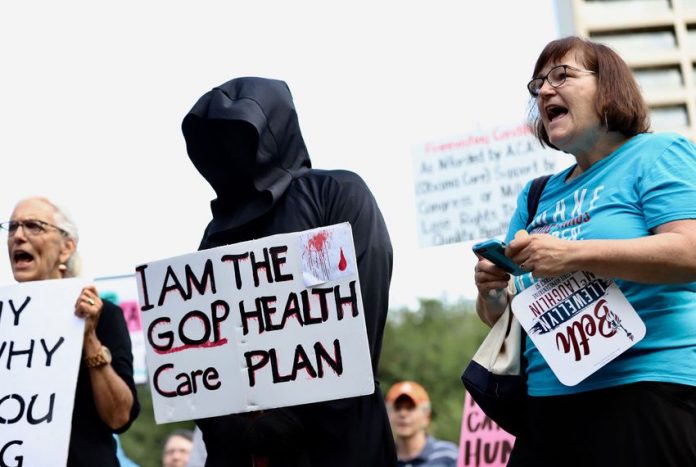 Last year, after a federal judge in Texas declared the entirety of the Affordable Care Act unconstitutional, throwing into question millions of Americans’ health coverage, the state’s Republican leaders promised they would come up with a plan to replace it.

But on Tuesday, after a legislative session that seemed to have no room for issues other than property tax reform and school finance, Texas will ask a federal appeals court in New Orleans to end the law in its entirety — without offering a replacement plan.

The conservative crusade against portions of the act, known as Obamacare, has spanned a decade. But Texas’ latest lawsuit, filed in February 2018, became an existential threat to the law after U.S. District Judge Reed O’Connor ruled in December that it is unconstitutional in its entirety. At stake: the subsidized health coverage of roughly 1 million Texans, sweeping protections for patients with preexisting conditions, young adults staying on their parents’ insurance plans until age 26 and a host of low-cost benefits available to all people with health insurance, including those covered through their employers.

Texas already has the highest uninsured rate in the nation.

In a highly unusual — if not entirely surprising — move, the U.S. Department of Justice has declined to defend the federal law, leaving a California-led coalition of blue states to protect it. As the case proceeds, Obamacare has remained in place, and likely will until the litigation is finally resolved.

Attorneys for the state of Texas argue the health law cannot stand since the Republican-led Congress in 2017 zeroed out Obamacare’s individual mandate — a penalty imposed on people who chose to remain uninsured. Democrats had favored the penalty as a way to induce more people to purchase health insurance, with the goal of reaching near-universal coverage. Without it, Texas argues, the whole law must fall.

But the state’s Republican leaders have offered few ideas about what should replace Obamacare, a law that touches practically every aspect of health care regulations and includes several popular protections for patients. Gov. Greg Abbott— a vocal critic of the law — pledged in December that if the law remained struck down on appeal, “Texas will be ready with replacement health care insurance that includes coverage for pre-existing conditions.”

Since then, he’s been quiet on the issue, including during this year’s 140-day Texas legislative session. Abbott did not respond to questions for this story.

A three-judge panel on the U.S. 5th Circuit Court of Appeals will hear arguments on the case Tuesday afternoon and then rule in the coming weeks on whether the law should stand.

One bill that did emerge from the legislative session would allow the Texas Department of Insurance to reestablish a high-risk health insurance pool for individuals with severe health problems. That pool, an expensive option for sick patients that was phased out under Obamacare, only insured about 28,000 people at its peak, experts said — a tiny fraction of the Texans poised to lose coverage if Obamacare is struck down.

State Sen. Kelly Hancock, R-North Richland Hills, the bill’s author, said it will provide “a stopgap measure until we reconvene.”

“You establish something until we gather back together, and we collectively, as a body, determine what the best path forward is,” Hancock said.

It would be up to the governor to call a special legislative session to pass a more robust plan. If he does not, the Legislature next meets in January 2021.

Reestablishing the high-risk pool in the absence of Obamacare would be like applying “a tiny Band-Aid” to a gaping wound, said Stacey Pogue, a health policy expert with the left-leaning Center for Public Policy Priorities.

This year, the Legislature did nothing to expand health coverage under existing law or propose alternatives to Obamacare, Pogue said.

“No plan, no bill passed,” Pogue said. “Not only did the Legislature not do anything to improve our miserable uninsured rate, this lawsuit would uniquely make it skyrocket.”

Total abolition of the law is one possible outcome from this week’s litigation. But legal experts across the ideological spectrum agree that Texas has a high bar to clear before Obamacare would be struck down.

For the lawsuit to proceed at all, both sides will have to convince a three-judge panel that they have standing to sue. That’s not a given; the court recently asked for additional information on that issue.

Next, Texas will have to persuade the judges that the zeroed-out individual mandate is unconstitutional.

But perhaps Texas’ most difficult point to prove centers on the question of “severability”: If the individual mandate is unconstitutional, must the rest of the law also fall? A wide array of legal experts say no, as does the California-led coalition, which points to the fact that the law has continued to function without it.

“It’s a really stupid lawsuit,” said Nicholas Bagley, a professor at the University of Michigan Law School who worked at the Department of Justice during President Barack Obama’s tenure. “I mean that quite sincerely. You’ve got to have a viable legal theory, and the legal theories here are so thin.”

Still, Texas’ arguments were persuasive to O’Connor, a George W. Bush appointee to the federal bench who has handed Texas several high-profile legal wins in recent years. Since 2015, almost half of the challenges to the federal government the Texas Attorney General’s Office filed in federal district courts in Texas landed in O’Connor’s courtroom.

The law’s constitutionality “is a live question,” said Rob Henneke, general counsel for the conservative Texas Public Policy Foundation, which will argue alongside Texas on Tuesday on behalf of a few individual plaintiffs in the lawsuit. “The trial court has said that it’s not constitutional. My hope is that state policy makers continue to move forward in looking past [Obamacare] and toward a state-based model that can actually provide great care for people when they get sick.”

The lawsuit is unlikely to be resolved at the appeals court. The losing side is all but certain to appeal the 5th Circuit panel’s decision to the U.S. Supreme Court, though the high court could decide not to review the case. The parties could also ask the full 5th Circuit to reconsider the case “en banc.”

“We will fight like the dickens to save Americans’ health care,” said California Attorney General Xavier Becerra. “With lives at risk and a bipartisan chorus of economists, scholars and medical groups standing by our side, it’s clear: This lawsuit has no regard for Americans’ health, lives or the law.”

If Texas’ lawyers ultimately prevail, it will constitute a tremendous ideological victory for the state’s conservative litigators — and present an overnight crisis for policymakers. Texas’ long-sought outcome would trigger a frenzied rush toward a replacement plan that has yet to materialize during the better part of a decade.

“The sooner Obamacare is enjoined, the better, so that states and individuals can prepare to operate freely again,” Texas Attorney General Ken Paxton said last year. His office did not respond to questions for this story.