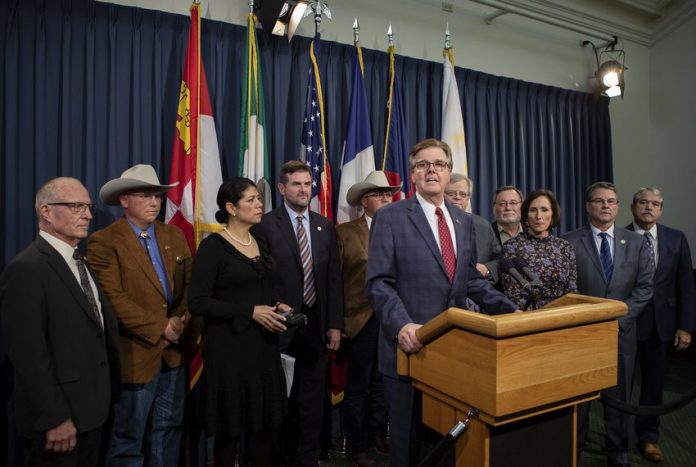 More than a year and a half after Hurricane Harvey ravaged the state, Texas Senate leaders announced a $1.8 billion trio of disaster relief bills on Wednesday that they said would create “a roadmap to prepare our state for future hurricanes and natural disasters.”

Flanked by senators who represent Harvey-impacted districts, Lt. Gov. Dan Patrickacknowledged at a Capitol news conference that storm-ravaged communities have been waiting for a long time to see what the state might do to help them recover. But Patrick and the senators who authored the bills emphasized in their Wednesday remarks that the result was the product of “a lot of thought and input” and is the best possible outcome.

“We said at the time [of the storm] we would dedicate ourselves to helping people rebuild their homes, their businesses, their communities and do all we could to mitigate,” Patrick said.

“I want to say to the victims of Hurricane Harvey: We heard you,” Kolkhorst said at the end of her remarks. “We’re with you. We’re not going to leave you. We’ve got your back.”

The Brenham Republican said SB 6, which would create the disaster response plan, is designed to “reduce the confusion and delay after an event.”

Sen. Brandon Creighton, a Conroe Republican who authored SB 7, which would create the flood infrastructure fund, described the package as the “most comprehensive, forward-reaching approach that any state has offered following a disaster.”

His bill is the most expensive of the three. It would withdraw $900 million from the state’s historically flush Economic Stabilization Fund to help local officials put up the so-called “matching dollars” they’ll need to draw down billions more in federal recovery funds.

That’s far less than the $1.3 billion that Houston Mayor Sylvester Turner has asked for on behalf of all 55 Harvey-impacted counties to help with local matching funds. He has said that would draw down another $11 billion in federal dollars for debris removal, for repairs of storm-battered government facilities, and to harden public and private structures so they can better withstand future storms.

A similar bill Creighton filed in early February would allocate $3 billion from the state’s emergency savings account for the fund. But he said in an interview after the news conference that the total price tag of the projects local communities have told the state they want to complete is less than that.

Sen. Larry Taylor, a Friendswood Republican who also spoke at Wednesday’s news conference, said about $200 million of the $900 million allocated under SB 7 would go to draw down federal funds for a multibillion-dollar project to construct nearly 27 miles of coastal levees in southern Orange County and to shore up nearly 30 miles of existing coastal levees in Port Arthur and Freeport. That project is a significant component of a larger coastal protection system that local officials and scientists have long envisioned to safeguard the state from deadly storm surges during hurricanes.

In the interview, Creighton emphasized that the $1.8 billion will make up about 70 percent of what the Senate will spend from the so-called rainy day fund this session. He, Patrick and the other senators also emphasized that separate Senate budget legislation proposes using $1.2 billion from the rainy day fund to assist with Harvey recovery. Much of that would go to school districts to help them make up for the lost tax revenue that followed a drop in property values — and for per-student funding lost after many children moved away after the storm.

Sen. Charles Perry, a Lubbock Republican who authored SB 8, which would create a statewide flood plan, filed an earlier bill that also would have withdrawn more money from the rainy day fund to finance projects in the plan. But he noted Wednesday that his bill includes about $150 million to repair all of the 500 high-hazard dams throughout the state.