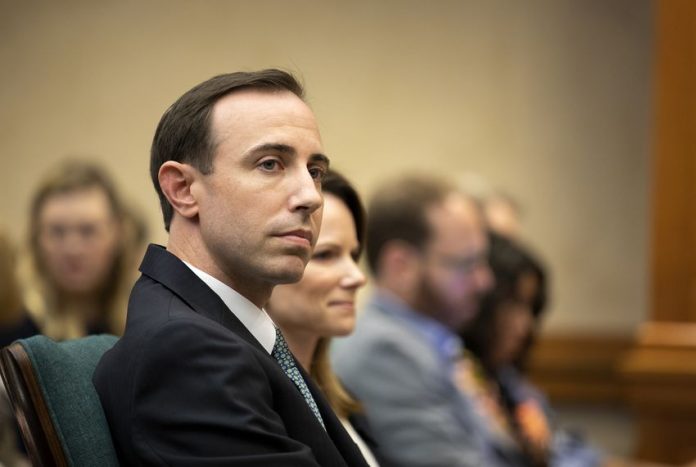 A Texas Senate committee voted Thursday to advance the nomination of Texas Secretary of State David Whitley — the most forward motion he’s made in weeks in a stalled nomination that faces increasingly steep odds.

After a 4–3 vote along party lines, with all the committee’s Republicans backing Whitley and all Democrats voting against him, Whitley can be considered by the full Senate, where he’d need a two-thirds majority that he doesn’t appear to currently have.

Whitley, who began to serve during the interim but requires Senate confirmation to keep his job much longer, has faced unusual opposition in the typically smooth confirmation process after his office last month rolled out a botched attempt to cull non-citizens from Texas’ voter rolls. In the weeks since that announcement, his office has conceded that at least a quarter of the nearly 100,000 voters initially flagged were naturalized citizens who should never have had their citizenship questioned. That number is only expected to grow.

Whitley, and his office, have drawn three federal lawsuits and widespread condemnation from civil rights groups and Texas Democrats — including the 12-member caucus in the Texas Senate, whose members have all said they oppose confirmation at this time. If the caucus sticks together — and if they all remain on the floor when the vote is called — they have the power to block him from confirmation.

Whitley, who appeared before the committee three weeks ago for a two-hour grilling over the bungled review effort, had been left pending in committee in its last two hearings even as other nominees sailed through. That seemed to bode poorly for his chances. The governor’s office has continued to back him “100 percent.”

And Gov. Greg Abbott said in a radio interview Thursday morning that he “wouldn’t be surprised” if Democrats change their minds on Whitley.

“We’ve had ongoing conversations with them and we maintain good relationship with them. And so we’ll see how things turn out,” Abbott told Lubbock radio host Chad Hasty. And he defended Whitley’s handling of the bungled probe, saying “secretary of state was relying on data from the Texas Department of Public Safety that was admittedly flawed by DPS, and DPS did not adequately communicate that to the secretary of state.”

In response to the criticism, a spokeswoman for the department said only, “DPS will work closely with the Secretary of State’s Office to provide them the data they need to ensure voter integrity in Texas.”

Before approving Whitley, the committee unanimously approved four dozen other nominees who have come before the committee. The committee considered Whitley’s nomination separately.

After weeks of controversy and closed-door meetings, there was little deliberation before the committee approved Whitley on Thursday. Just one Democrat, Sen. Kirk Watson of Austin, spoke before the panel voted, calling on his committee colleagues to reject Whitley but acknowledging that it looked unlikely.

“I know we’re gonna take the vote, and I can count votes,” Watson said. But Whitley’s “most important job is to protect the citizens’ right to vote. … It was just yesterday that a federal court made clear his office had failed in that job.”

The approval came, as Watson emphasized, less than 24 hours after a federal judge in San Antonio ordered that Texas counties may not purge voters from the rolls or issue letters demanding proof of citizenship while the litigation proceeds.

Because Whitley was approved by the committee separately from the broader slate of nominees, he can be taken up individually by the upper chamber. If his nomination is called for a vote while some number of senators are off the floor, it could be easier for Republicans to approve him without swaying any Democrats.

Even as his nomination continues to struggle, Whitley has been working behind the scenes to win favor in the upper chamber in a sign that he has hardly given up hope. Over the last several weeks, Whitley has met privately with senators. But as of last week, all 12 Senate Democrats made clear that they do not want a confirmation vote at this time.

On Wednesday afternoon, Whitley convened a meeting with lawyers from the civil rights groups suing the state over the citizenship review. In a statement on Wednesday, spokesman Sam Taylor said that Whitley made it clear that “every option is on the table.” But two lawyers who attended that meeting said they prevailed upon Whitley to rescind his office’s initial advisory, and that he made clear his office would not.