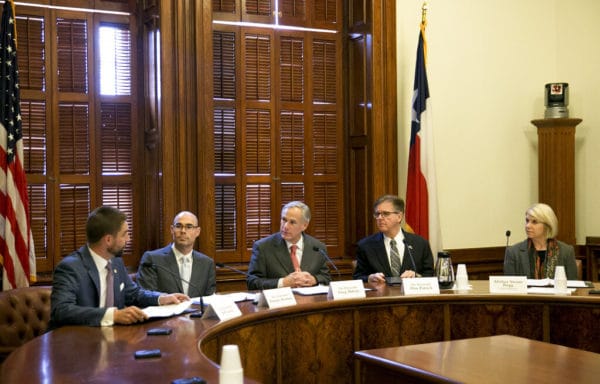 Texas Gov. Greg Abbott agreed Friday to remove a plaque in the state Capitol that rejects slavery as the underlying cause of the Civil War, bending after years of resistance by state Republican leaders in the face of Confederate monuments falling nationwide.

A unanimous vote by the State Preservation Board, which Abbott chairs, ordered the removal of the 60-year-old plaque that pledges to teach “the truths of history,” adding that “one of the most important of which is that the war between the states was not a rebellion, nor was its underlying cause to sustain slavery.”

The plaque is among nearly a dozen Confederate markers in and around the Texas Capitol. It’s the first slated to come down since the deadly 2017 white nationalist rally in Charlottesville, Virginia, that led to the removal of a string of Confederate monuments nationwide.

But Abbott and state leaders resisted acting on similar calls in Texas, and the governor made no comment after Friday’s vote. Texas Republicans had been resolute after the Charlottesville rally that tearing down Confederate markers wouldn’t change history, but pressure intensified after a black lawmaker from Dallas began condemning the plaque that hangs near his Capitol office as historically indefensible.

“Why shouldn’t we be able to talk about the monuments on the Capitol grounds or anything else,” Johnson said. “I don’t think it’s a conversation we should be afraid to have, not in 2019 in America, in Texas.”

The State Preservation Board is governed by Texas’ three most powerful Republicans — Abbott, Lt. Gov. Dan Patrick and newly chosen House Speaker Dennis Bonnen. They quickly voted to remove the plaque with no discussion and left without speaking to about a dozen reporters in the room. None of their offices immediately returned messages for comment.

The plaque was first hung in 1959. It remained mounted to wall next to a staircase in the Capitol after the vote, and it was unclear when it would be removed.

But Texas Republican leaders since then have stood firm as scrutiny over Confederate monuments intensified in recent years. Following the Charlottesville rally in August 2017, Abbott said racism and hate-filled violence was never acceptable, but that “tearing down monuments won’t erase our nation’s past.”

Two months later, Johnson and Abbott discussed the plaque in a private meeting, which ended with both sides offering conflicting accounts of the conversation. Abbott’s office pushed back on Johnson saying the governor indicated support for taking it down, but later said that “substantially inaccurate historical statements” don’t belong on display at the Capitol.