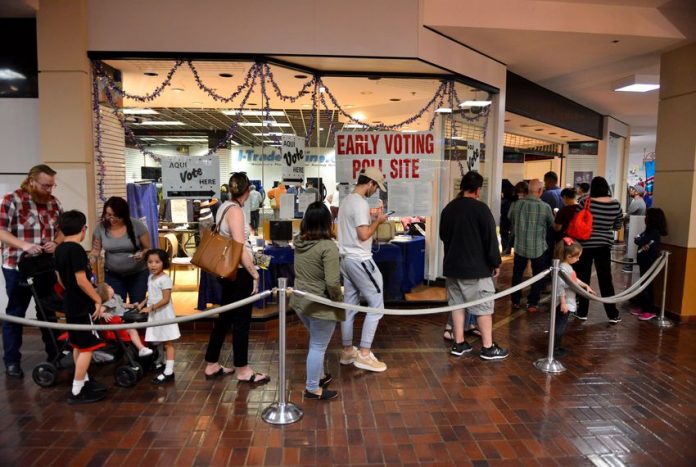 Early Friday afternoon, on the last day of early voting, Jacque Callanen strutted out of the Bexar County Elections Department with a noticeable pep in her step and a smile on her face, her red, white and blue American flag slip-on shoes pounding against the pavement and her “Bexar County Elections” lanyard swinging freely back and forth.

“If you got to see the people behind the scenes right now, you would see them high-fiving,” said Callenen, who is the elections administrator of Bexar County.

That’s because her county, the fourth largest in Texas, saw what she said was record-breaking turnout during early voting this year. By the time the polls closed Friday, 37.7 percent of registered voters in Bexar County had voted, well past the 19.8 percent turnout at the same point in 2014, the last midterms, and close to the presidential-year turnout recorded at the same point in 2012 and 2016.

“We’ve got a lot of unhappy and activist voters out there who have been wanting to vote for a long time,” said Dana DeBeauvoir, the Travis County clerk. She attributed the bump in the number of voters to President Donald Trump.

She said voter turnout dipped slightly earlier in the week, as is often the case, but that the numbers quickly rebounded toward the end of the week, which she said will help alleviate some traffic on Election Day.

Hoping to avoid the Election Day crowds, voters lined up hundreds deep at the Wonderland of the Americas shopping mall polling location in San Antonio late Friday evening, winding their way through a maze of vendors selling everything from colorful knit sweaters to fruity juices at the Expo Mexican Fest, which coincided with the last day of early voting.

Alfred Castellanos found himself at the end of the line with less than an hour until the polls closed, but he said the massive line did not bother him.

“Everyone’s in the same boat,” Castellanos said. “Everyone wants to change something.”

He said he came out to vote because the past two years were the “worst” he had experienced and that he wanted to have a voice when it came to issues of immigration and the economy.

Voting at the mall late Friday evening was a family affair. Kids not old enough to vote tossed around volleyballs and played games on tablets.

Hector Saenz said he was waiting in the long line because he was “dragging” his son to vote.

“I voted earlier at the courthouse, but my boy is not as smart,” Saenz said, teasing his son about the long wait time.

Brandon Rottinghaus, a political science professor at the University of Houston, said that the “blockbuster” turnout seen during early voting this year sets a new bar for future elections.

“It’s clear that much of the future of Texas will be fought in suburban Texas,” Rottinghaus said.

He said counties like Collin, Denton, Montgomery and Williamson saw a greater number of Democrats turning up to vote than in previous elections. That doesn’t mean that Democrats are going to win those counties, he said, but it does mean that they have become much more competitive.

“On one hand, suburban Texas is now younger and more ethnically diverse, replacing the first generation which is middle age and white,” Rottinghaus said. “And Donald Trump and some of the inflammatory rhetoric have really caused a lack of interest among Republican women and college-educated voters in the suburbs.”

Rottinghaus said statewide Hispanic turnout is up slightly from 2014, which he said is “good but not great for Democrats.” While it looked like Democrats were doing better than Republicans in border counties early on in early voting, he said that it now looks like Republican voters are turning up in larger numbers.

“It’s not the groundswell that Democrats had hoped for,” Rottinghaus said.

The same story applies to young voters, Rottinghaus said. Although more young voters turned out in 2018 than in 2014, he said the 2016 presidential year still has both of the midterm years beat.

“This seems to show that younger voters, although inspired by an electric O’Rourke campaign, still need that push of a president at the top of the ticket to turn out,” Rottinghaus said.

But Callanen, playing with the colorful assortment of flag pins on her lanyard, beamed as she said that young voter turnout during early voting in Bexar County doubled from the 2014 midterms. Whereas early voting turnout among young people — those in the 18 to 24 category — normally hovers around 3 percent during midterm elections, she said it was at 6.7 percent this week. Still, she said, it’s important to note that senior citizens typically make up the largest voting bloc.

Alla Diab, 23, is one of those young voters who came out to vote at the Wonderland of the Americas on the last day of early voting. She brought her friend, Nivia, 23, a first-time voter.

“It’s really in the hands of young people,” Diab said. “When you actually see the results of polls, you’re like, whoa, because one person really can make a difference.”

Robert Stein, a political science professor at Rice University, said there is no question that Texas’ voter turnout is in the “stratosphere” this year but cautioned against reading too much into the high numbers.

“There is no question that there is cannibalization of votes from Election Day,” Stein said. “Voters aren’t waiting around.”