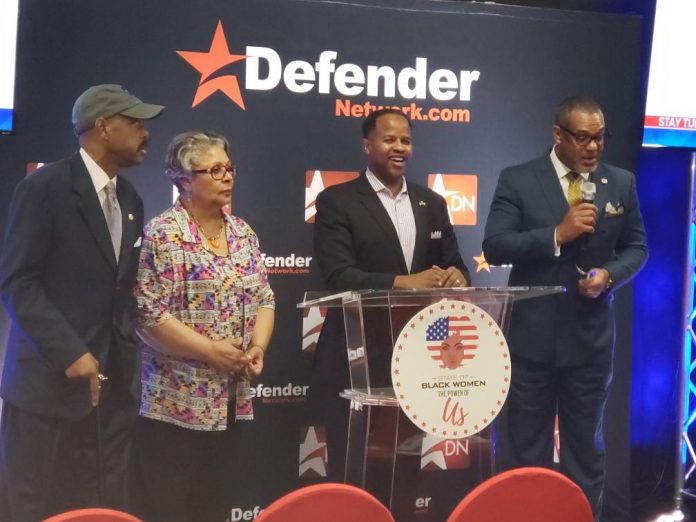 It was a beautiful sight Thursday evening, as Black women across the city of Houston gathered at the Ensemble Theatre to attend the State of Black Women Great Debate Watch Party.

Attendees of the event were greeted by smiling faces, tasty refreshments, and large screens with live coverage of the Democratic Debate being held just a few miles away at the historic Texas Southern University.

During commercial breaks, there were trivia games with cash prizes; and everyone was given cards with access codes to electronic ballots which allowed them to share their opinions about the debate and various political topics on both national and local levels.

Some of these topics included: gun laws, legalization of marijuana, “the Black vote”, and impeachment.

“The debate has been a real debate compared to previous ones,” said Sonny Messiah Jiles, Publisher and CEO of the Defender Network. “The women who came to watch the debate are committed and understand the importance of the political process.”

Some of the issues that were of the most importance to the women in the room, were that of: health care, education, and criminal justice reform.

“Public education is fundamental,” said Attorney Lalla Morris. “There are also some charter schools that are doing some great work. We have to meet children and families where they are.”

At the end of the event, Senator Borris Miles urged everyone to go to the polls stating, “Black women make up the majority of the vote.”

“Nobody is going to take care of our issues but us. The is the most important election there is”, said State Legislator Senfronia Thompson.

The genuine concern with the trajectory of the United States of America – especially as it pertains to African Americans and the communities in which we live – was apparent. Everyone who attended the watch party was serious about hearing what the candidates had to say and how they are going to help our country.