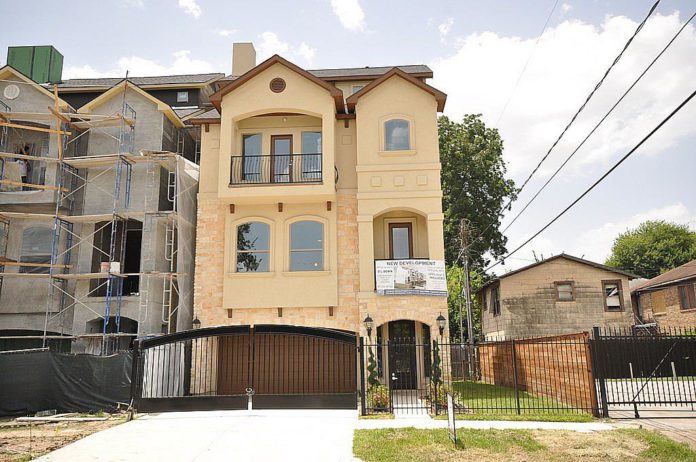 According to the U.S. Census Bureau, the number of African-Americans in the Greater Third Ward has shrunk by more than 10 percent over the past decade. At the same time, the white population has doubled, and both education and income levels have risen.

This gentrification – the racial and economic flipping of a neighborhood – has many residents of the historic African-American neighborhood conflicted over the change.

“I see it in the nannies from different countries caring for white babies, more development, more police patrols, and more white people running, not for their lives but for health and exercise,” said Melodrama Boutique owner Jackie Adams, who added that local stores like Family Dollar and Fiesta have drastically improving their product offerings, including organic products, to meet the demands of Third Ward’s newer residents. “That part of the transition is good. It saves me a trip to Montrose to do my grocery shopping.”

But the increased convenience, property values and city services come with a price, according to Dr. Assata Richards, founding director of the Sankofa Research Institute.

“Residents are being displaced because eventually property values go up, property taxes increase, and this puts pressure on low and moderate income residents,” said Richards. “The number of demolitions of existing structures, you don’t see that same level of development for affordable housing.”

Richards points to area lots that once housed traditional, single-family or shotgun homes, now standing vacant or containing townhomes priced well out of the range of current Third Ward residents who have a median income of under $20,000/year.

Gerald Womack, President and CEO of Womack Development & Investment Realtors says he has seen an influx of wealthier suburbanites moving back within the 610 Loop due to the heavy traffic and higher gasoline prices.

“Approximately three years ago, there was a lot pressure being placed on Third Ward, Medical Center, and downtown area homeowners to sell their homes. Residents began placing signs in their yard saying, ‘My home is not for sale.’ As a result, developers, recognizing the demand, began building exclusive loft and condominium complexes that the average Third Ward resident cannot afford.”

Gentrification, or white flight in reverse, turned Fourth Ward into Midtown, with demographic changes every bit as drastic as those in Greenwood, Oklahoma after the 1921 destruction of Black Wall Street by violent white mobs. Richards hopes Third Ward can avoid a similar fate, and seeks to engage supporters from across the city.

“The story of Third Ward is the story of Black people in Houston, who all are connected to it in some way. Within Third Ward are significant monuments to the trajectory of Blacks in this city, including Unity Bank, Riverside Hospital, Emancipation Park, the El Dorado Ballroom, and TSU. So many prominent Blacks came out of Third Ward,” said Richards, who also contends Third Ward has benefitted all Houstonians.

“We Black people have always taken what other folk didn’t want and made it something great. So it’s not just Blacks who need to have this conversation and education; everyone finds connections to Third Ward.”

Third Ward’s history of Black ownership stands out to John Guess III, of the Guess Group.

“Having ownership is important, and we have a lot of Black ownership in Third Ward. It’s critical in anyone’s portfolio,” said Guess, who worries about that ownership slipping away.

“Unfortunately, many of these owners are grandchildren of the original owners, and live in other neighborhoods or out of state. Many see their properties as a burden or a drain on their finances rather than a plus. Many are selling these properties as the value goes up.”

Guess believes the loss of young Black professionals to other neighborhoods hurts not only residents, but local businesses also.

Adams says her shop on Almeda is in Third Ward for the long-haul, and will welcome whatever customers come through her door. Still, she’s not looking forward to the potential exodus of Black-owned businesses.

“My only apprehension is how long will [business in Third Ward] be dominated by us? When will white businesses take over?”

The vast majority of Third Ward’s Black businesses lease space, leaving them at the mercy of building owners who can increase the rent and price them out at a moment’s notice. Those that remain may find themselves dealing with a drastically different customer base. However, gentrification is not the first challenge faced by Third Ward businesses.

Third Ward’s Dowling Street was once synonymous with Black economics, and home to countless business, including Tyler Barber College, Watchtower Insurance Company and the Dowling Theatre, and the office of Eldreway Stearns – the unofficial headquarters of Houston’s arm of the Civil Rights Movement.  The Professional Amateur Boxing Association (PABA) and Wolf’s Department Store and Pawn Shop are still operating, as is KCOH on Almeda, just down the street from Reggae Hut, Zayd’s Naturally Natural Hair Studio and Scrappy Brown’s.

Richards worries about displaced residents, noting that 75 percent of Third Ward dwellers are renters. Many are currently being evicted or told their spaces are being torn down.

“The displaced are moving to South Union, South Park, or the Greenspoint area, wherever affordable housing exists. Some are staying with neighbors, wanting to stay as close as to Third Ward as possible.”

Richards works with the Emancipation Economic Development Council (EEDC), a collaborative of faith-based organizations, nonprofits, businesses, CDCs, local government entities and other community stakeholders fighting, or rather managing the changes gentrification brings. She encourages all concerned with Third Ward’s legacy and history get engaged and informed by participating in one of the EEDC’s many organizations to develop community-based plans for Third Ward’s future.

Womack believes it’s important to recognize the signs of the times.

“What happens in Third Ward can happen to any Black community inside the loop.”

Richards, who views Third Ward’s history as a testament to the courage and resilience of Blacks in this country, believes the current battle for Third Ward’s future is a defining moment.

“We say a lot about individual successes, but what does it mean for us to be a prosperous community? Preserving our vision of Third Ward will be the legacy of our generation; how we take our knowledge, education and resources and bring them to bear on the problems facing our community.”