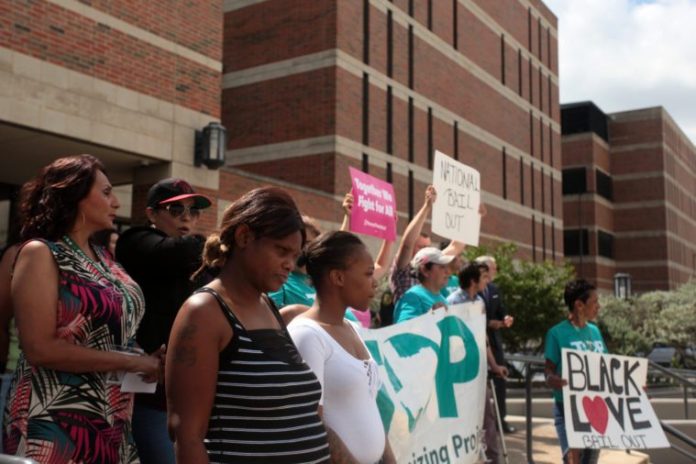 Last week, the Texas Organizing Project, with the financial support of the community and the National Bail Out Movement, reunited eight Black families in time to celebrate Mother’s Day by bailing the mothers out of the Harris County Jail.

Among the eight women bailed out was the mother of a 4-year-old boy who had been in jail nearly six months on a charge of drug possession of less than a gram. Her bond was set at $1,000, but because neither she nor her family had the money to pay the bail, she remained in jail awaiting trial, which has been reset several times.

“This is why Harris County Jail is bursting at the seams, and why Sheriff Ed Gonzalez has asked for 200 more beds,” said Tarsha Jackson, Right2Justice director with the Texas Organizing Project. “By setting bonds people can’t afford and repeatedly resetting trials, judges are violating people’s basic rights to a speedy trial and equal protection. This woman shouldn’t have been in jail. She should have been with her son and assisting her attorney in mounting a vigorous defense, which we’re all entitled to. But because she’s poor, she spent months in a jail cell at a high cost to her and taxpayers.”

After bailing the seven mothers out, they were celebrated this past Saturday at a brunch. TOP is also helping the women connect to the services they need to defend themselves and rebuild their lives.

“A lot of the women and men in jail, who are awaiting trials, don’t belong there,” Jackson said. “They should be getting help with addictions and mental health, and getting job training. As a county, we’re treating these women as disposable, robbing them of their humanity, and along the way harming the children under their care.

“This is not right. This is not justice. These judges know that these women don’t have the resources to pay even these low bonds. They are being punitive by failing to consider their ability to pay. These women deserve to be free until their trials. If they are found guilty, then they should receive a punishment that is commensurate with their offense. But they shouldn’t be punished before just because they’re poor.”

TOP also bailed out four Black mothers from the Bexar County jail and six from the Dallas County jail.